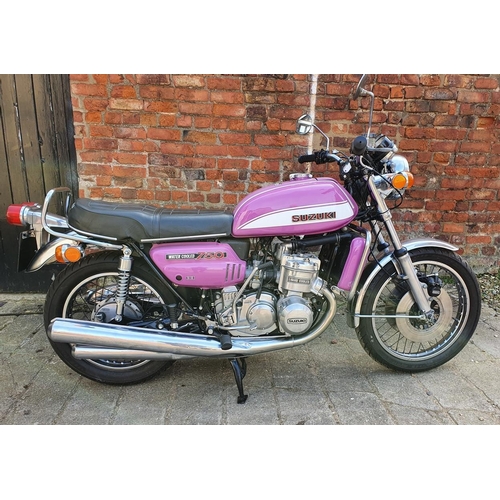 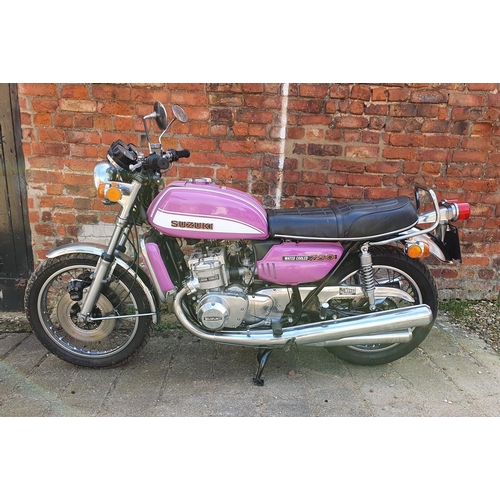 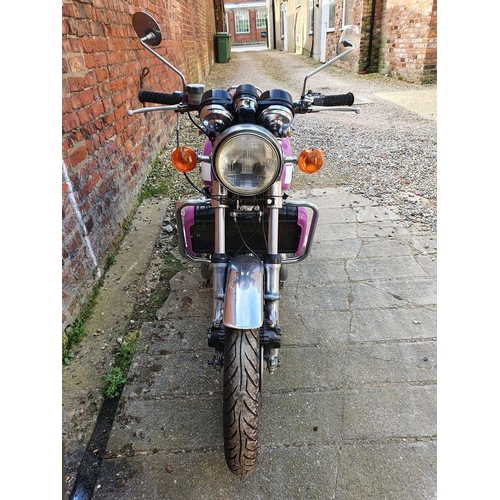 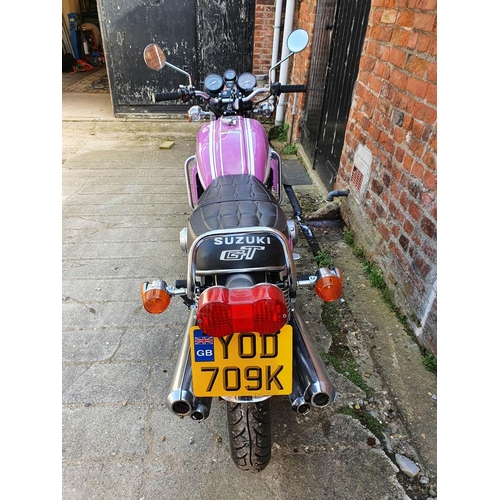 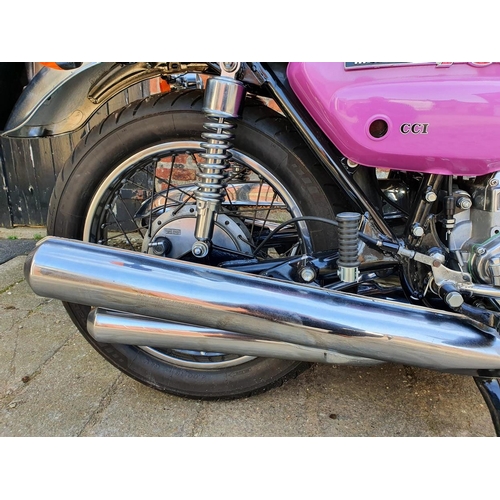 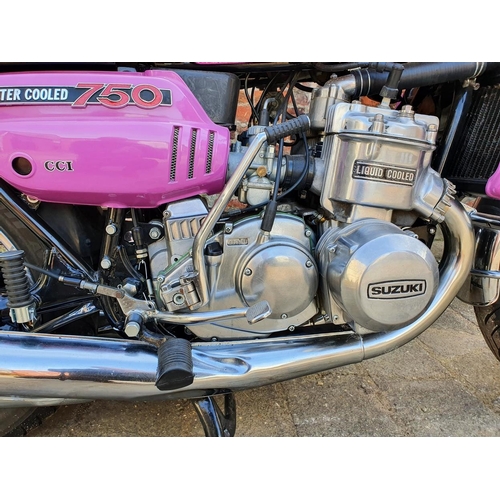 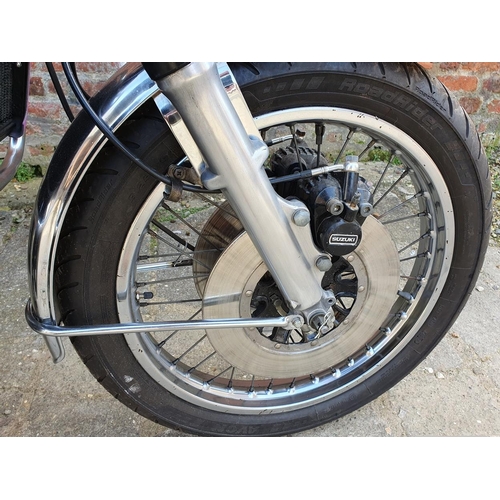 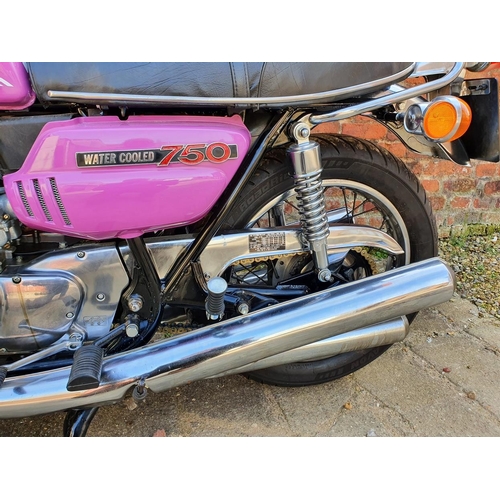 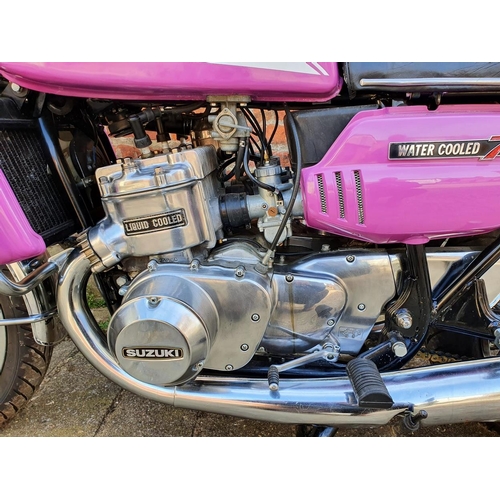 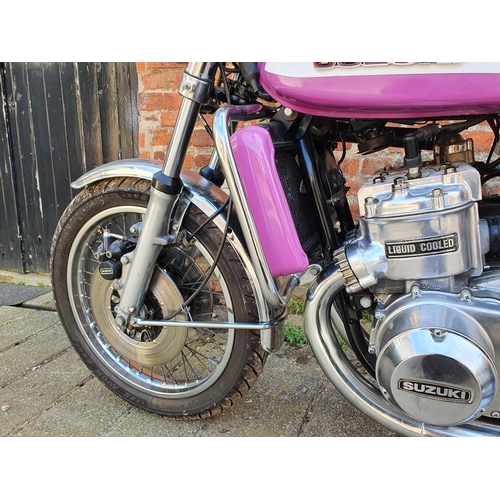 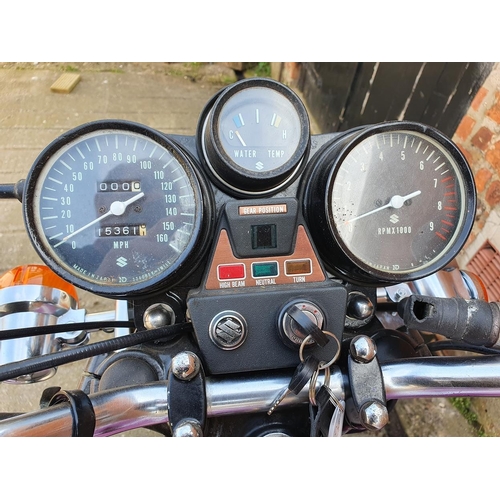 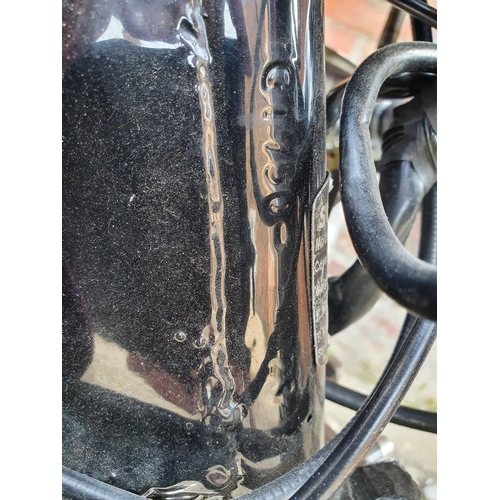 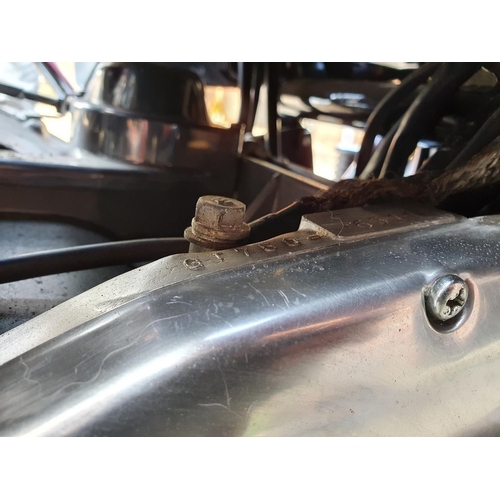 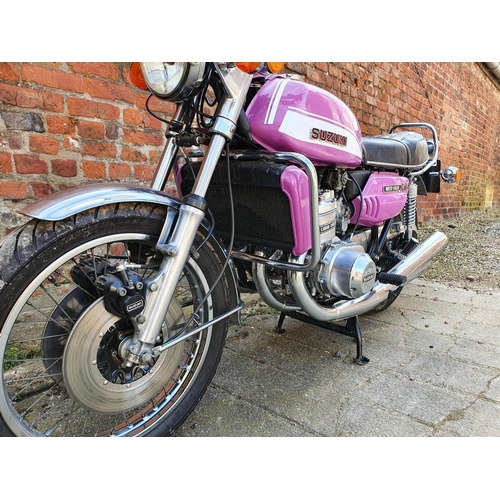 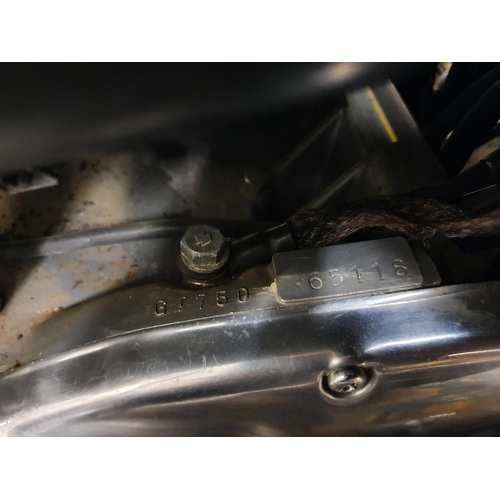 1972 Suzuki GT750 J, 750cc. Registration number YOD 709K. Frame number GT750 - 18823. Engine number GT750 - 65118
The GT750 was unveiled to much fanfare at the 1971 Tokyo show. This was Suzuki's answer to the Honda CB750, and the Kawasaki H2, but was very different to both. Driven by an in-line 3 cylinder 2-stroke engine, the 'Kettle' was also liquid cooled. Suzuki surprisingly opted for drum brakes (on the original), but the front was a 9 inch 4-leading shoe design, so was actually reasonably powerful. The engine was very impressive, with a nice flat torque curve, and good acceleration from as low as 2000 rpm.
The engine firing impulses corresponds to that of a 6-cyl 4-stroke so this engine type runs very smoothly when in good tune. Visually these bikes are distinguished by the characteristic water cooling radiator in front of the engine, there is a cooling fan behind the radiator which kicks in at random occasions. The bike was known for the wide power band/low end torque allowing exceptional acceleration performance from low revs, similar in characteristics to the triple 2-stroke air cooled Kawasaki H2 750 (Mach IV) but more 'civilised'.
The GT750 was not the first large displacement liquid cooled two stroke motorcycle, or even the first two stroke triple - that honour goes to Scott Motorcycles in the UK which produced a very small number (specifically eight !) of 750cc and 1000cc liquid cooled two stroke triples in the 1934/1938 time period. However, the GT750 was the largest displacement, mass produced (roughly 71,000 were sold world wide in total), liquid cooled two stroke engine ever offered for retail sale.
The 1973 model, GT750 K was announced with extra chrome plating and two 295 mm discs replacing the drum front brake. No other manufacturer was offering dual front disc brakes at this time, so this was quite a marketing coup for Suzuki.
According to VOSA YOD was MOT'd in May 2103 at 23,054 miles although it was not registered with DVLA, so possibly an import. In November 2014 it was MOT'd with a mileage of 23,060, DVLA allocated the YOD registration number and it was bought by Alexandre Filho for £3,000; he commissioned an extensive rebuild of the machine spending some £7,000 on it. Stotford Engineering stripped and rebuilt the top end of the engine, rebuilt the running gear and ancillaries at a cot of £1,920. BAZ Kettle Clinic rebuilt the bottom end, including polishing the crankshaft at a cost of £1,500 and Motorcycle Works of Peterborough undertook another £1,200 of work.
By 2016 it was on the road and MOT'd at 23,507 miles. Rarely used in May 2018 our vendor purchased it from Premier Motorcycles of London and had the frame powder coated and the exhaust system rechromed, at this time the speedo was changed and an MOT issued in August 2019 at 15,361 miles, today it is the same.
Offered for sale as our vendor is moving to a smaller property without the storage for his collection.
Sold with the V5C, current MOT, various receipts for works undertaken. 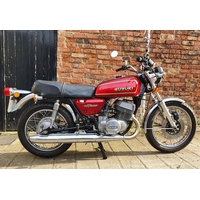 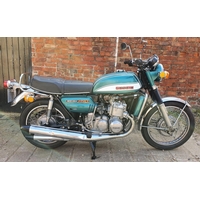