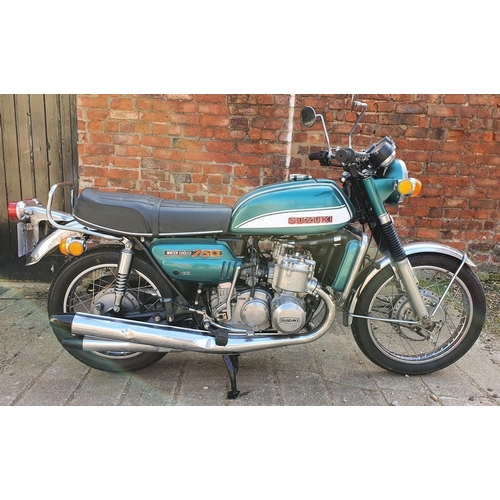 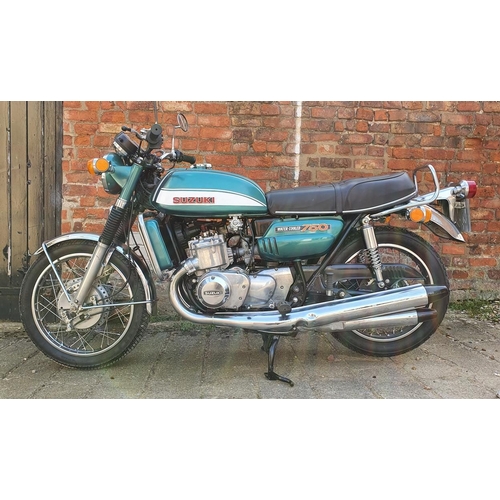 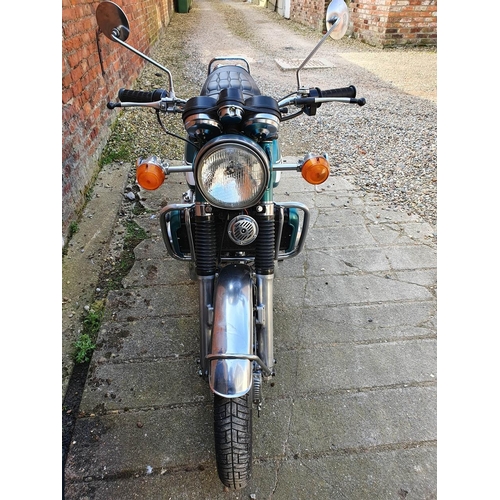 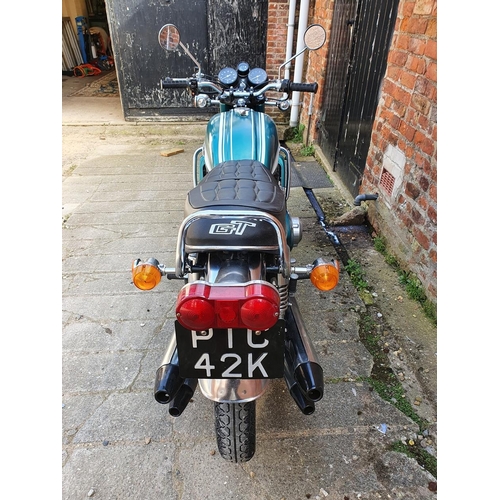 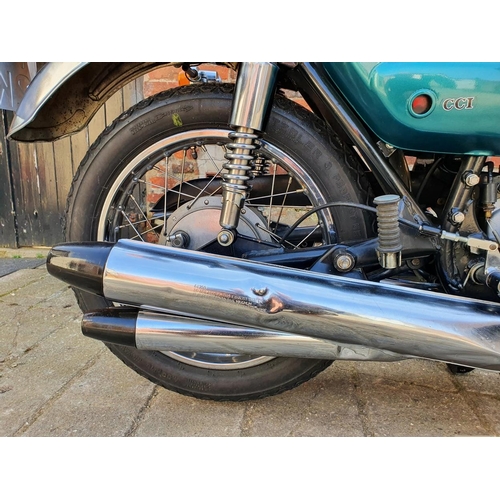 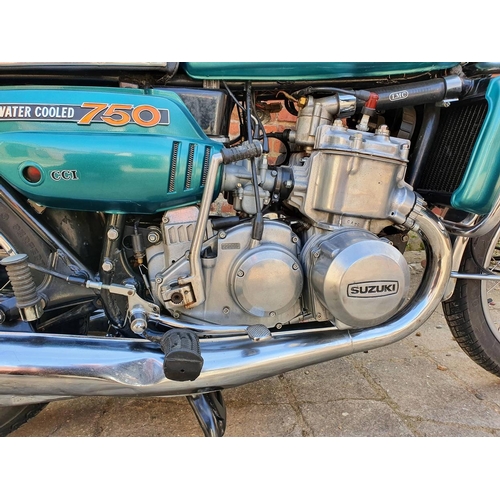 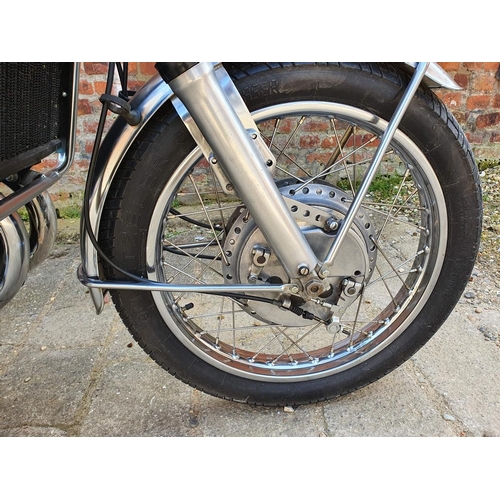 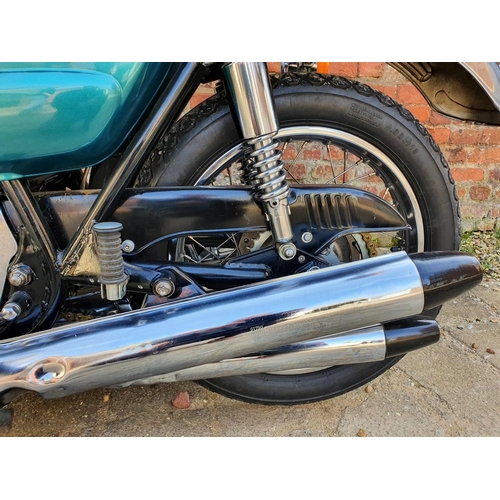 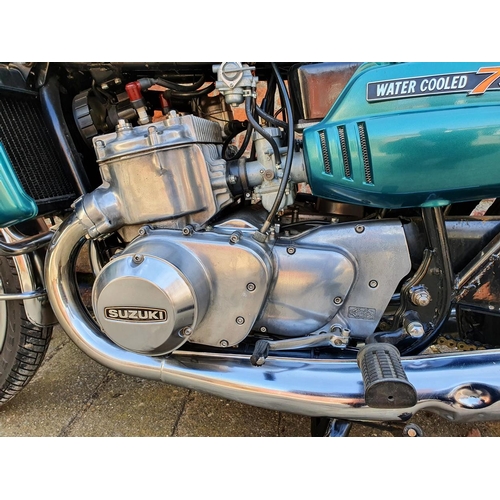 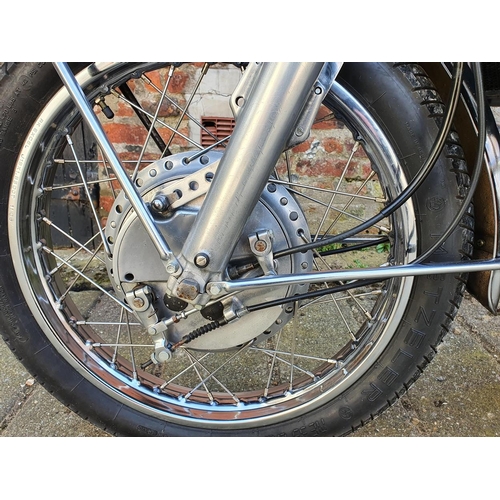 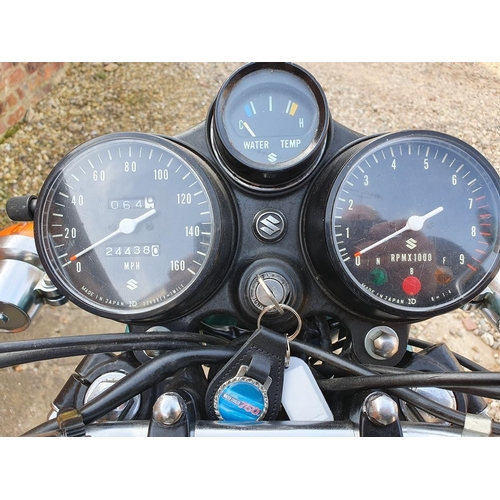 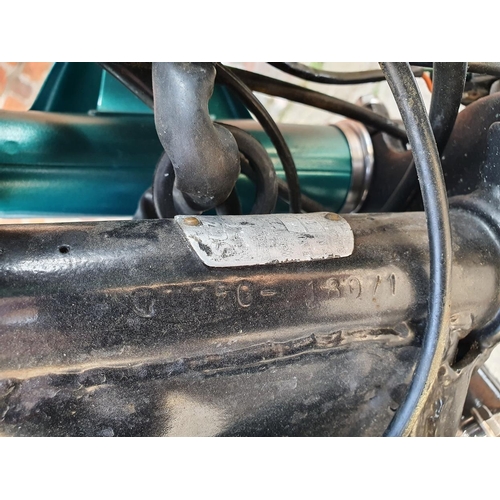 1972 Suzuki GT750 J, 750cc. Registration number PTC 42K. Frame number GT750 - 18071. Engine number GT750 18106.
The GT750 was unveiled to much fanfare at the 1971 Tokyo show. This was Suzuki's answer to the Honda CB750, and the Kawasaki H2, but was very different to both. Driven by an in-line 3 cylinder 2-stroke engine, the 'Kettle' was also liquid cooled. Suzuki surprisingly opted for drum brakes (on the original), but the front was a 9 inch 4-leading shoe design, so was actually reasonably powerful. The engine was very impressive, with a nice flat torque curve, and good acceleration from as low as 2000 rpm.
The engine firing impulses corresponds to that of a 6-cyl 4-stroke so this engine type runs very smoothly when in good tune. Visually these bikes are distinguished by the characteristic water cooling radiator in front of the engine, there is a cooling fan behind the radiator which kicks in at random occasions. The bike was known for the wide power band/low end torque allowing exceptional acceleration performance from low revs, similar in characteristics to the triple 2-stroke air cooled Kawasaki H2 750 (Mach IV) but more 'civilised'.
The GT750 was not the first large displacement liquid cooled two stroke motorcycle, or even the first two stroke triple - that honour goes to Scott Motorcycles in the UK which produced a very small number (specifically eight !) of 750cc and 1000cc liquid cooled two stroke triples in the 1934/1938 time period. However, the GT750 was the largest displacement, mass produced (roughly 71,000 were sold world wide in total), liquid cooled two stroke engine ever offered for retail sale.
PTC, a rare J model, was first registered on the 5th July 1972 and its early life is unknown. In September 2013 David Bradford acquired it and began a comprehensive overhaul, including a crankshaft overhaul by Chris Applebee Engineering, the brakes were overhauled and the tinware repainted in the original Candy Jackal Blue. It was MOTed in July 2014 at 24,041 miles.
In January 2017 our vendor purchased it from Chris Hall Motorcycles with a mileage of 24,328 and he then recommissioned it and had the exhaust system rechromed and the tank repainted. Little used the mileage rose to 24,414 in 2018 and 24,431 in 2019, today it stands at 24,438 and is very good condition.
Offered for sale as our vendor is moving to a smaller property without the storage for his collection.
Sold with the V5C, current MOT, various receipts for works undertaken. 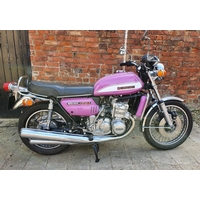 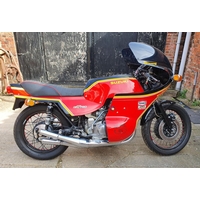