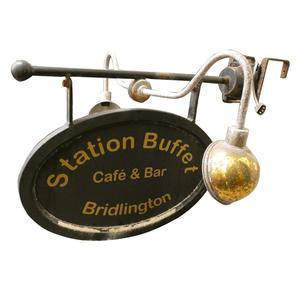 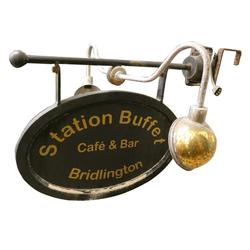 It was love at first sight for the winning bidders of Lot 70 at the Bridlington Station Buffet Sale on 14th February 2020 at Spicer's Auctioneers.

Owners of The Old Station, Allerston in North Yorkshire, a rail enthusiasts dream getaway location were anxious, excited, terrified even but determination enabled the Bensons to outbid the competition. They also managed to purchase a bistro table to be housed in their new ticket office kitchen at the premises in the same auction. I remember speaking to them, they knew the Four contemporary Art Deco style ceiling lamps, with frosted grass bowls were perfect for their holiday business near Pickering, proud as punch they packed each light with care knowing they would be hanging from their own ceilings so

John Saddler had owned the station buffet for many years and was well known in the area, as well as with those arriving or departing by train, many travellers made it a tradition to visit the immaculately presented, treasure trove of train related trophies adorning the walls. The colourful hanging baskets a greeting or waving off visitors to Bridlington along with a whiff of seaside which could be held momentarily in the nostrils before the sound of the imperative announcements echoed off the walls. John passed away on 7th February 2021 almost a year to the day of the auction, but while he was in better health ahead of the big day, was able to curate and contribute to the auction of his beloved cafe which he had run for over 17 years. Spicer's were thrilled to be able to offer his collection at the Driffield saleroom to the many admirers and enthusiasts who came to the sale.  Friends meeting up reminiscing about days on the railways provided the soft soundtrack to the day with occasional bursts of laughter, ooh's and aah's as the hammer fell lot by lot and the distant tickling of cups and saucers for our own buffet car. It was a splendid day still talked about at our current Railwayana and Heritage Steam auctions at our new premises in Goole.