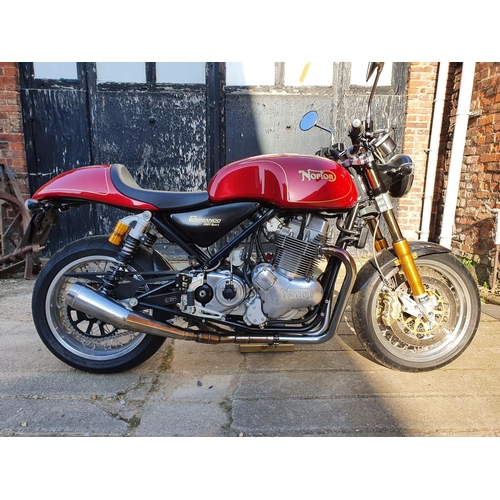 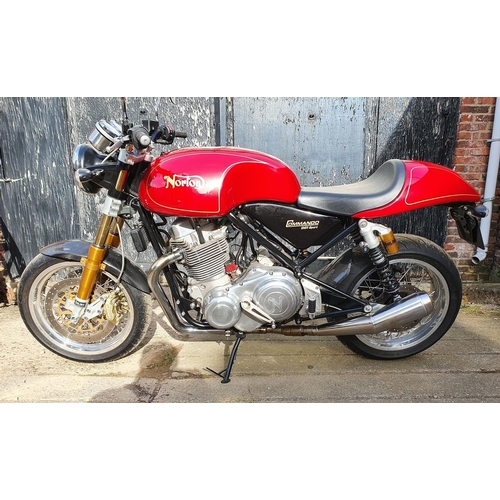 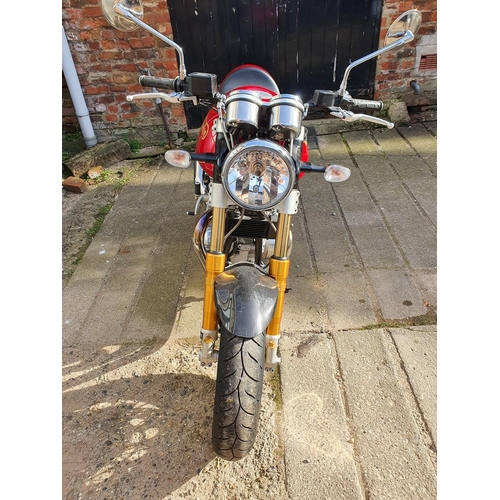 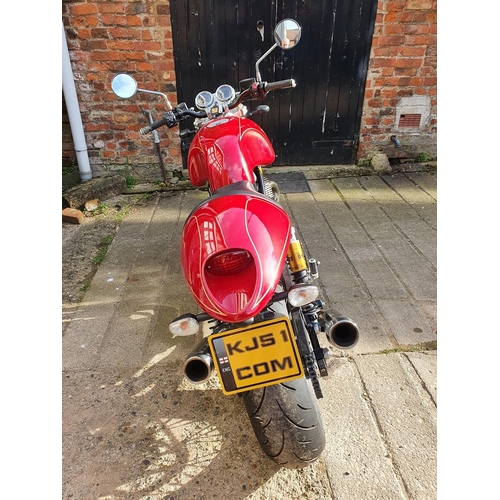 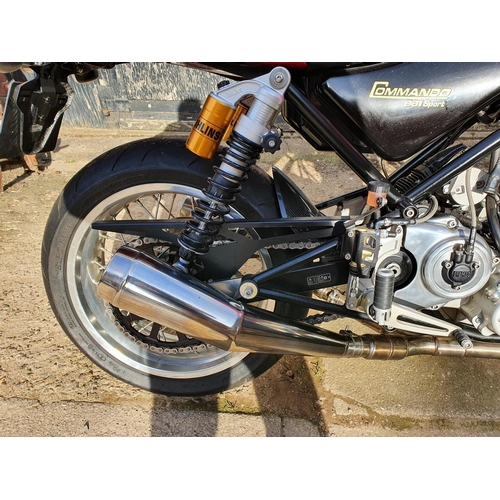 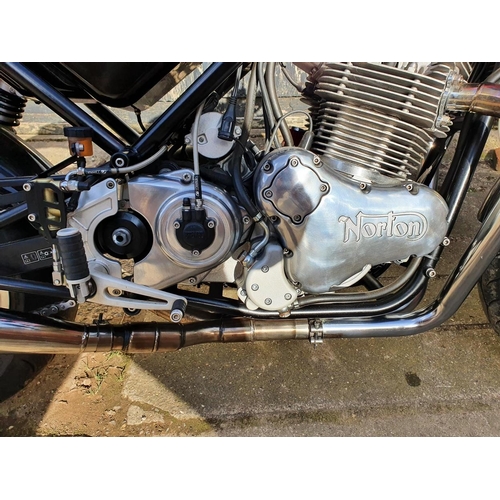 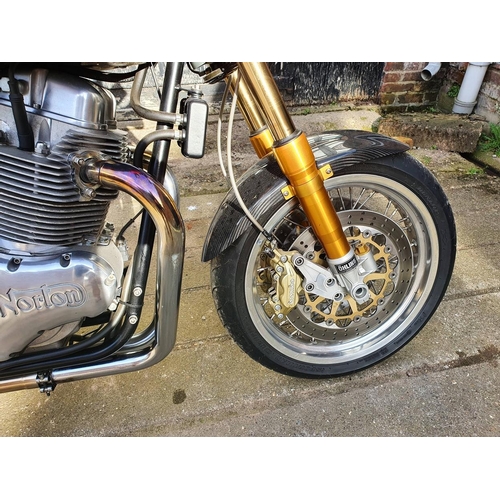 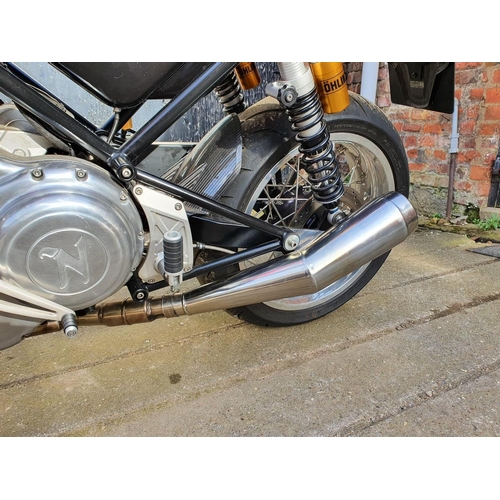 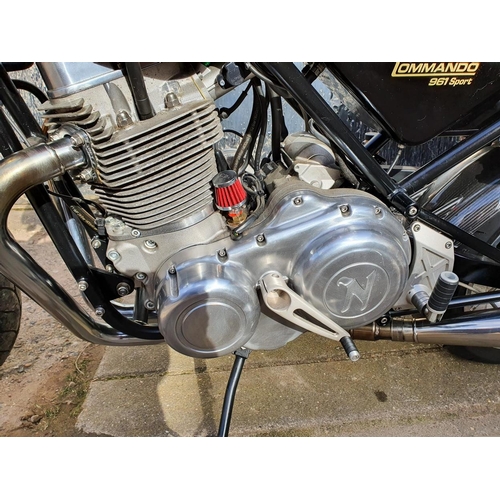 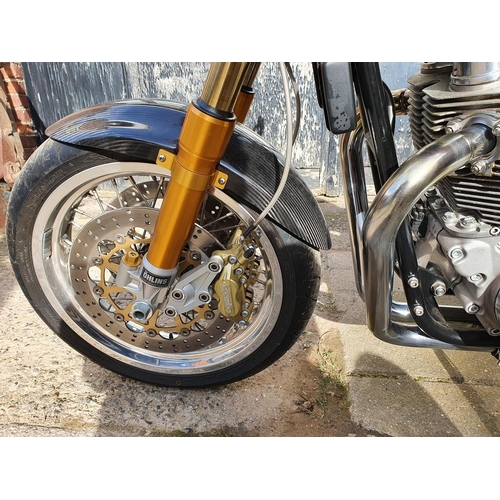 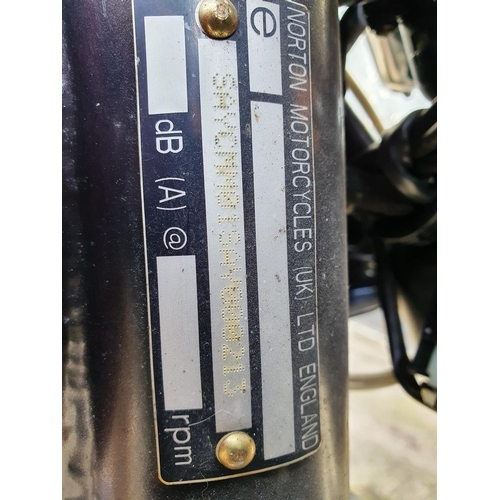 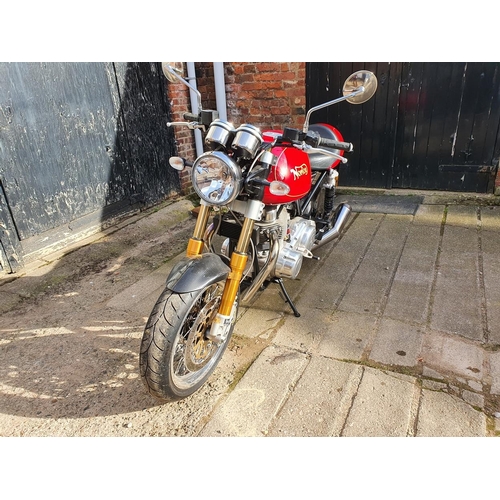 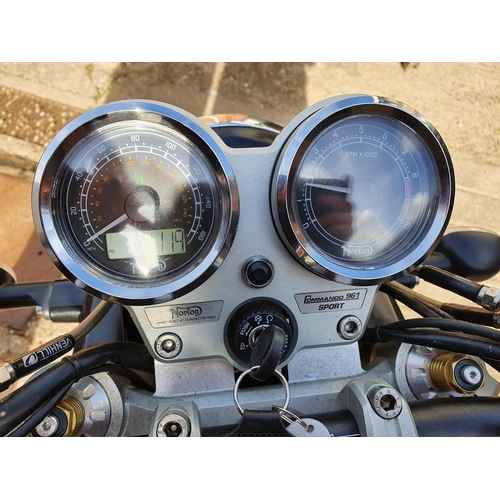 2011 Norton Commando 961 Sport, 961 cc. Registration number KJ51 COM. Frame number SAYCMM01SAY000213. Engine number 501/0037.
Few motorcycle makers (outside Italy) have had as troubled a history as Norton, which over the last 40 years has undergone periodic revivals, all of which, ultimately, failed. Norton's enduring fascination stems from a reputation forged on the world's racetracks during the first six decades of the 20th Century, when the silver-and-black bikes from the Bracebridge Street factory swept all before them. The revitalised company existed until recently, Stuart Garner, acquired the rights to the Norton name from its US owners in 2008.
Development and production of a new Commando model had been begun by Kenny Dreer of Oregon in the late 1990's and this all-new design was further developed at Norton's factory at the Donington Park race circuit. Recognisably related to the last Commando of the 1970's, the new café racer-style Norton roadster boasts an over-square (88x79mm) air-cooled overhead-valve twin-cylinder engine incorporating a 270° crankshaft and counter-balancer. A maximum output of 82bhp (at the rear wheel) is claimed, giving a top speed of over 130mph; deliveries of the new Norton Commando 961 SE commenced in 2010.
On 29 January 2020, it was announced that the company had gone into administration and on the 17 April, it was reported that India's TVS Motor Company had acquired the business in a £16 million cash deal.
COM was purchased from Norton on the 26th January 2011 by Karl Jackson, and serviced by them in June 2011 at 559 miles, MOT'd in June 2014 for the first time at 933 miles and a year later at the same mileage, in 2016 it was serviced and MOT'd by Krazy Horse of Bury St. Edmunds at 1034 miles. In 2017 it was purchased by our vendor from The Bike Specialists of Sheffield and MOT'd at 1047 miles. In 2019 he had it MOT'd at 1,119 miles and today it is at the same mileage.
Sold with the V5C, MOT until August 2019, service book, handbook, wallet, two keys and various receipts; the battery is new.
Offered for sale as our vendor is moving to a smaller property without the storage for his collection, Spicers can highly recommend this machine. 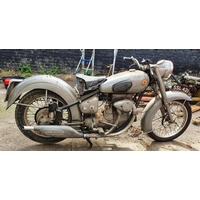