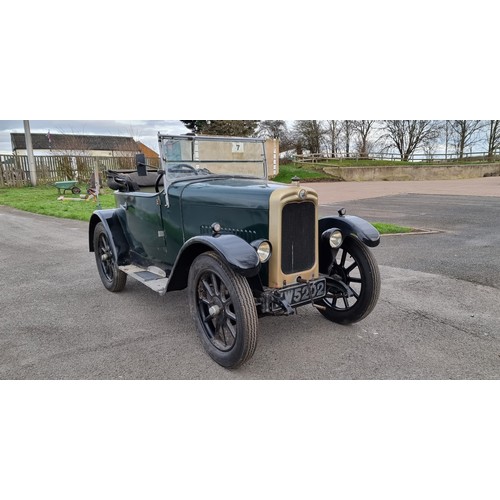 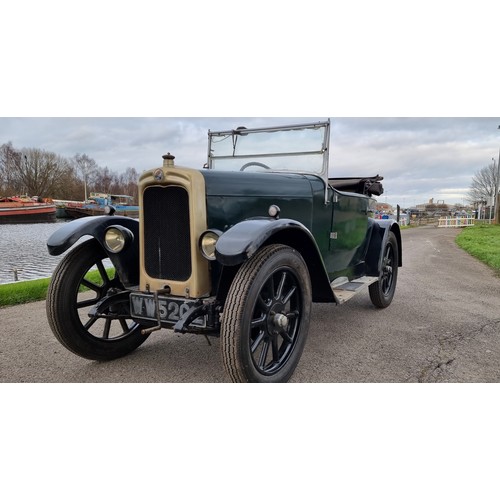 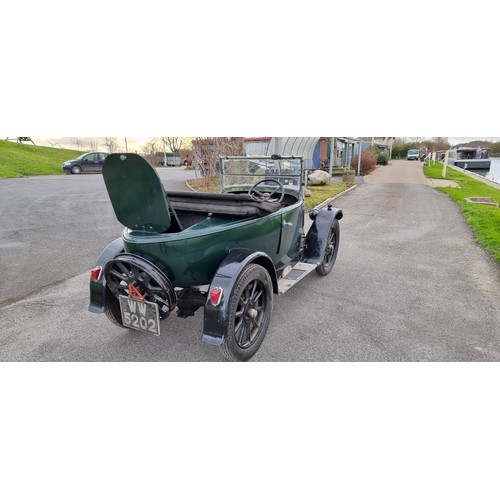 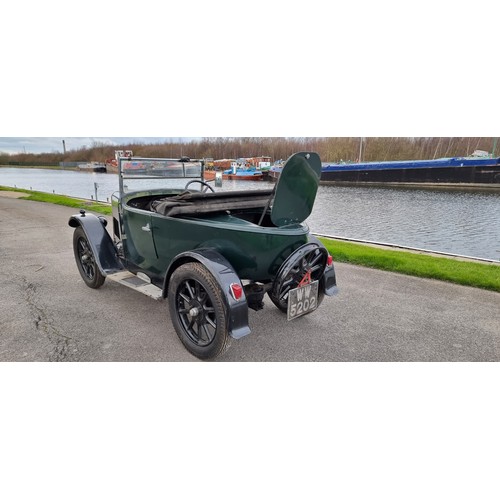 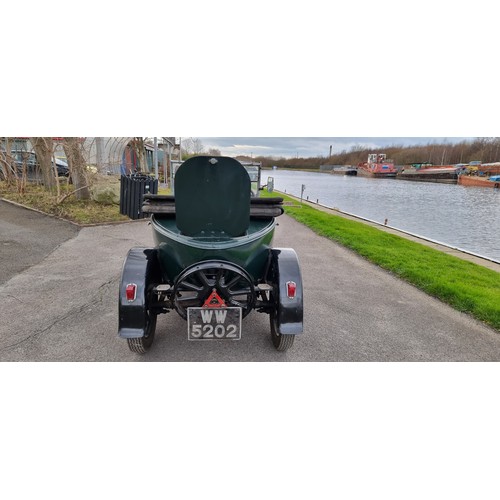 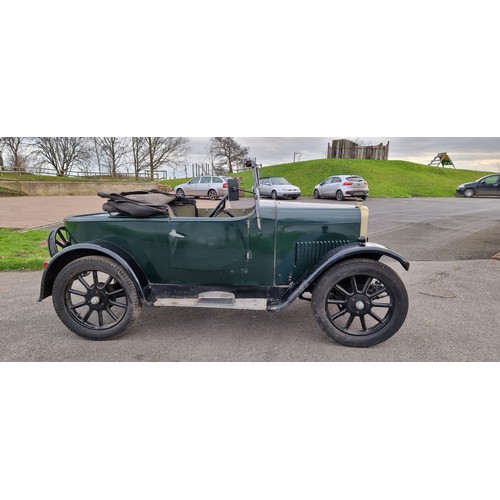 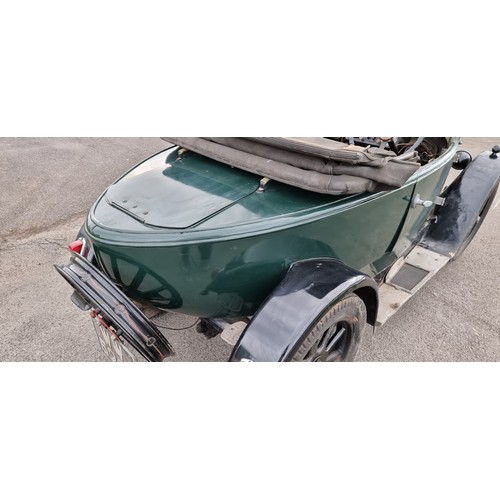 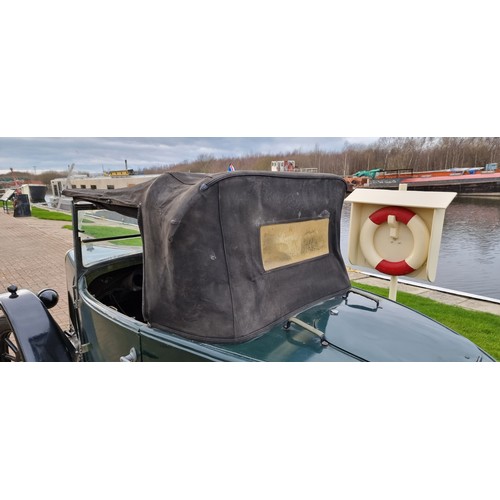 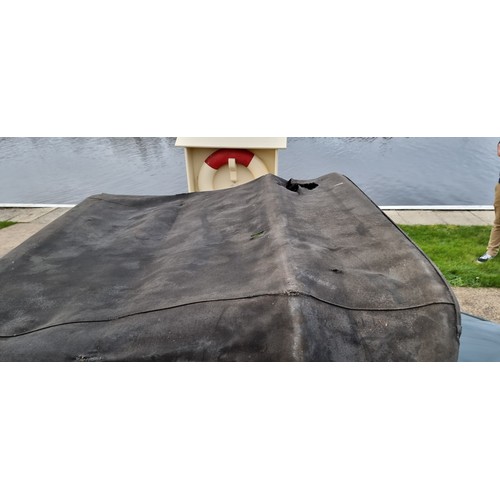 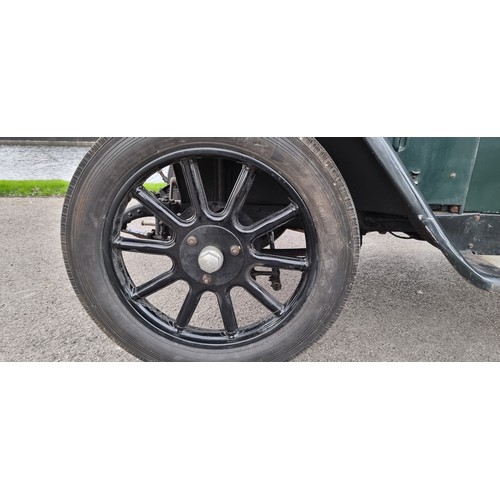 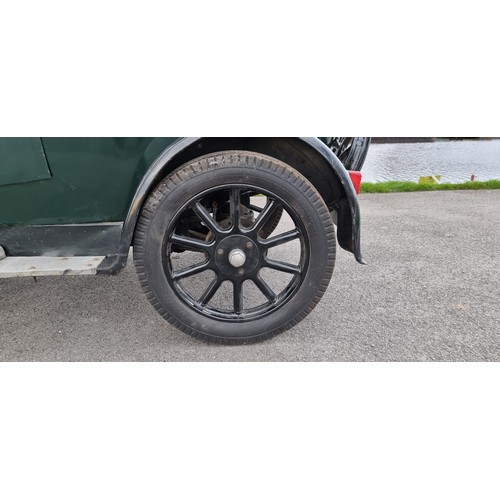 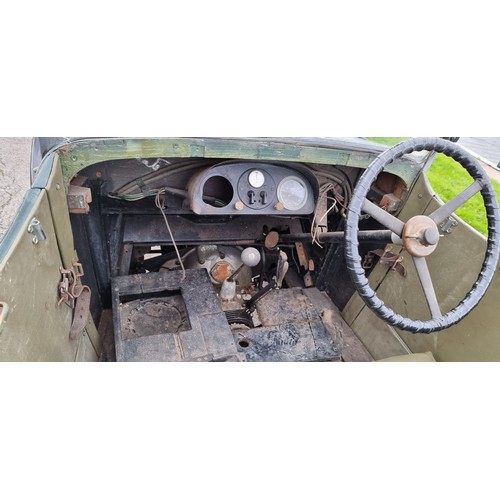 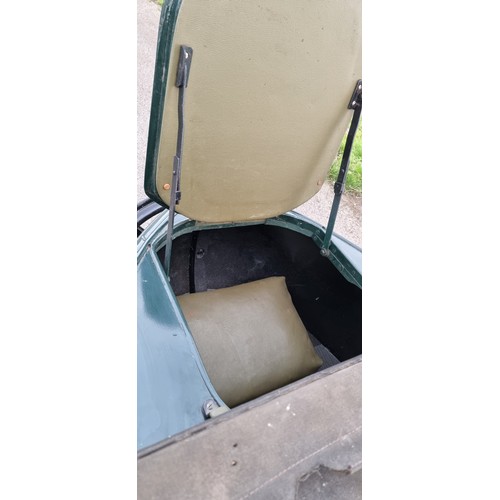 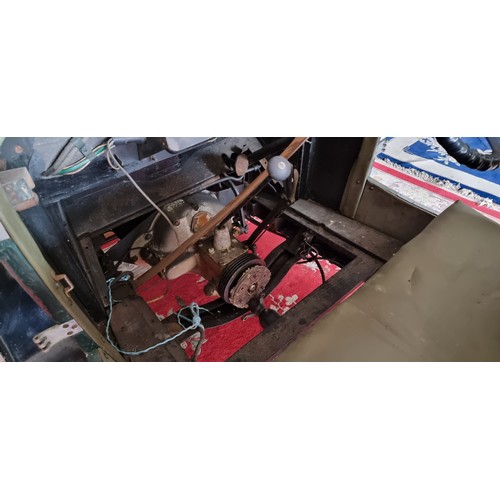 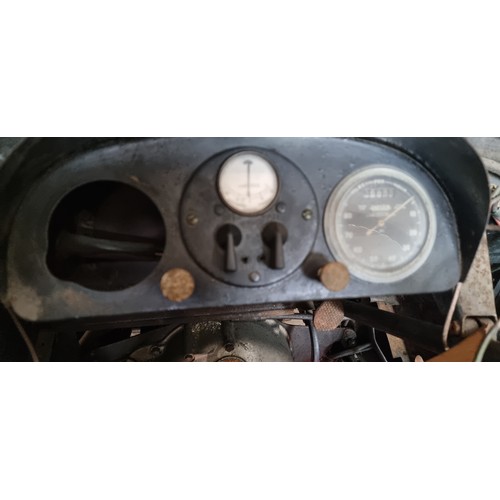 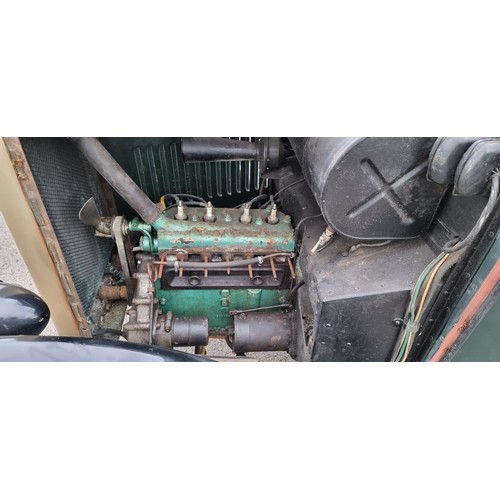 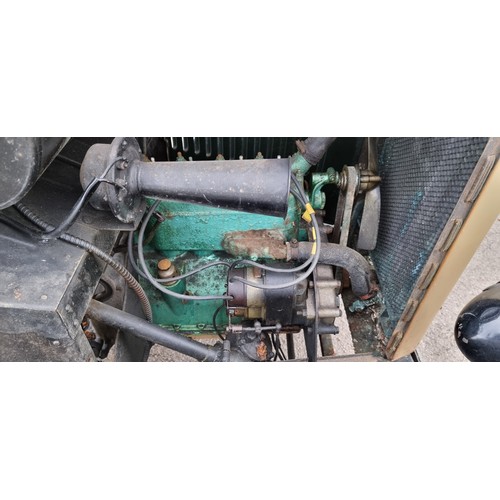 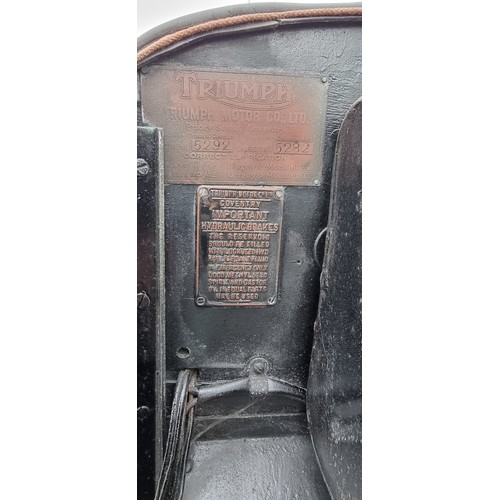 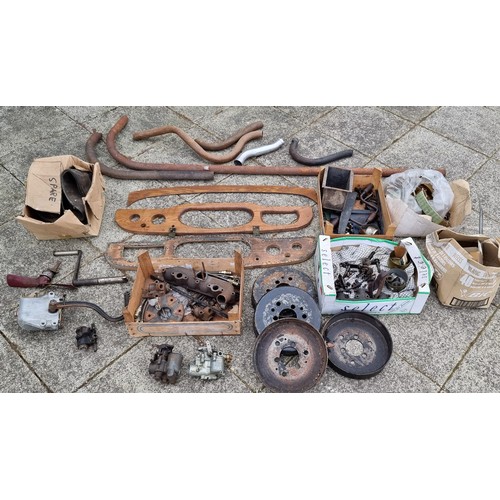 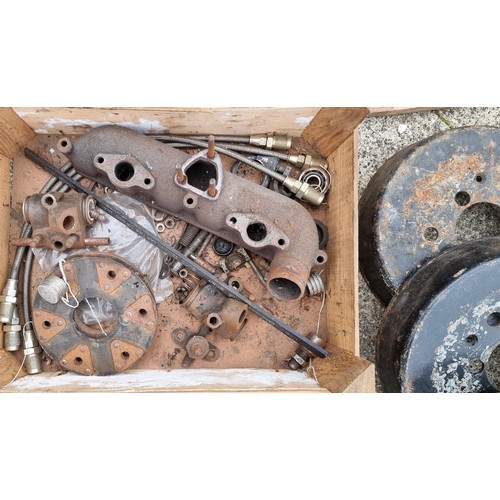 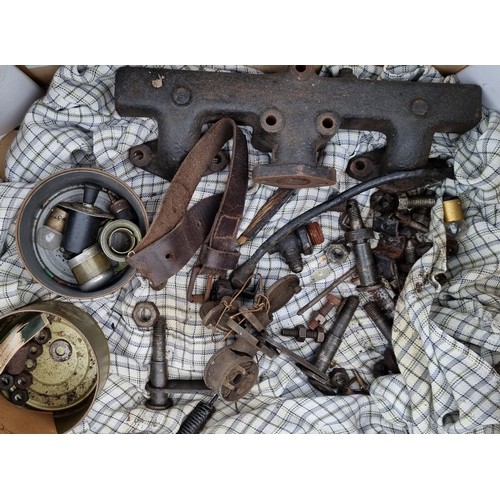 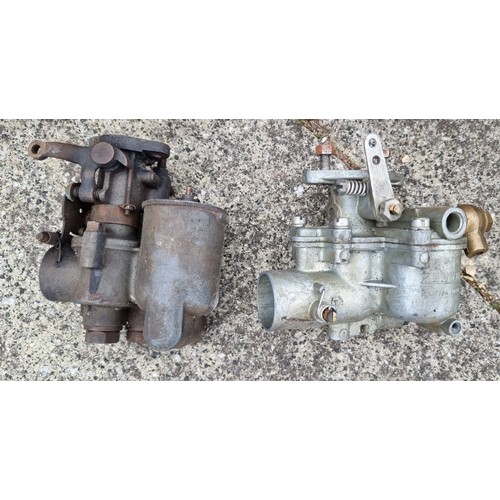 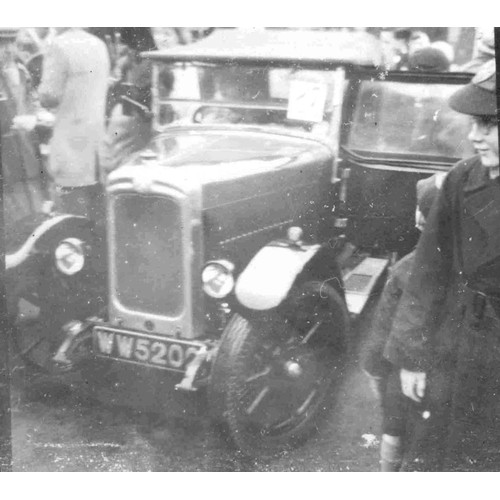 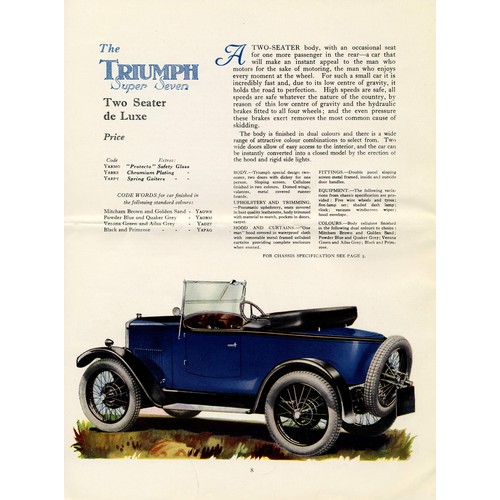 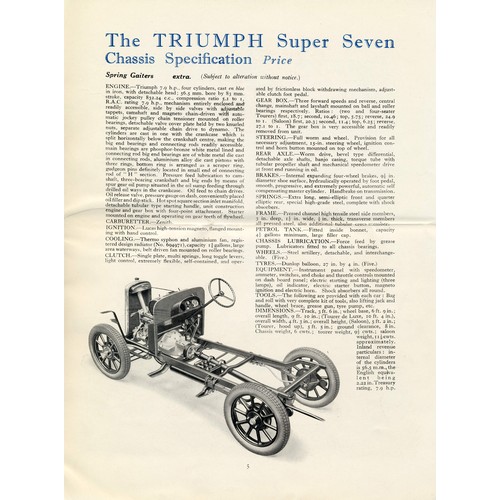 1928 Triumph Super Seven two seater de Luxe, 832cc. Registration number WW 5202. Chassis number 5282. Engine number 5292.
The Triumph Motor Company of Priory Street, Coventry, produced its first car in 1923. The Super Seven, produced between 1927 and 1932, was their third model, designed by Arthur Sykes late of Lea Francis, and Stanley Edge who had assisted Herbert Austin in designing the Seven, and was targeted at the quality economy slot previously filled by Humber and Talbot. Launched in 1927 it had a 832 c.c. side-valve engine with a three bearing crankshaft, mated to a three speed gearbox. It had hydraulic brakes on all four wheels and a transmission handbrake, with a worm drive axle. The 81ins wheelbase frame had semi-elliptics at the front, quarter elliptics at the rear, the wheels could be either artillery or wire. With a top speed of 53 m.p.h. it could cruise at 40 m.p.h. and return fuel consumption rates of 35 to 40 m.p.g.
During the long production run many body styles were offered including; 4-Seater Tourer, 2/4-Seater Tourer, Super-Charged Sports, 2-Seater Gnat, Coachbuilt Saloons, Fabric Saloons, 2-Seater Fixed Head Coupe, Close Coupled Saloon Landaulette, Tickford Sunshine Saloon and 4-Door Pillarless Saloon. Prices varied from £149 10s for a 1927 Popular Tourer to £198 for a 1931 Tickford Sunshine Saloon. It is estimated that just under 15,000 Super Sevens were produced with many being exported to Australia in ‘rolling chassis’ form and some 158 are believed surviving. A supercharged model with a smaller 747cc engine was also available from 1929-30 which could hit 80mph. It was replaced by the Super Eight, a rebadged Super Seven, with the addition of wire wheels, the option of a 4-speed gearbox and bumpers fitted as standard.
WW was first registered in Leeds on the 24th March 1928 and its early history is unknown. In 1960 it was photographed at a rally by persons unknown. It was sold by Alec Fenby in June 1998 to our vendors father. He was a retired engineer and started work on getting it mobile again, the brakes were stripped and new pads obtained, the carb was removed and a similar example obtained. Unfortunately the project stalled and it remained partially stripped until our vendor inherited it in 2002. It has remained in the same condition for his tenure.
Now being sold as the storage facility is no available, it is sold with the V5C, V5 and receipt from Fenby. The Pre 1940 Triumph Motor Club would be very happy to welcome the new custodian to its ranks 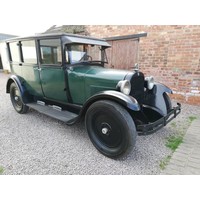