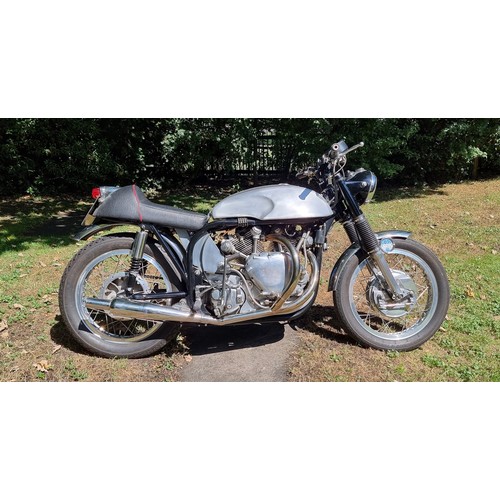 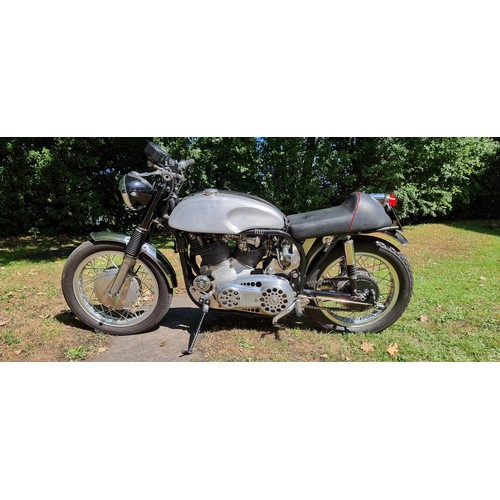 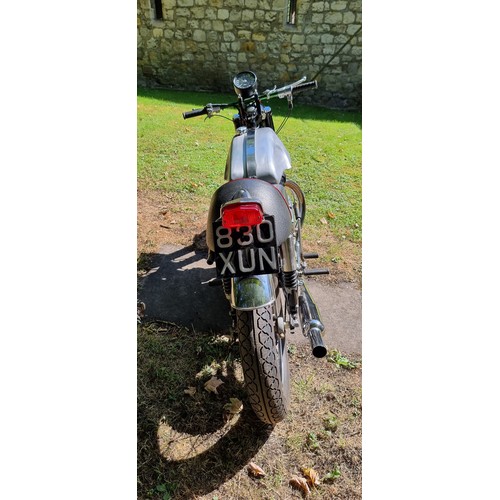 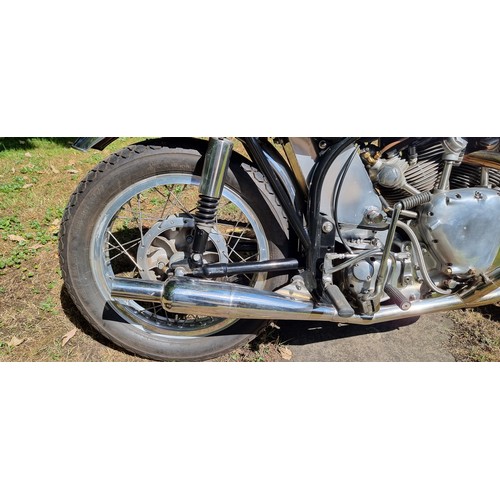 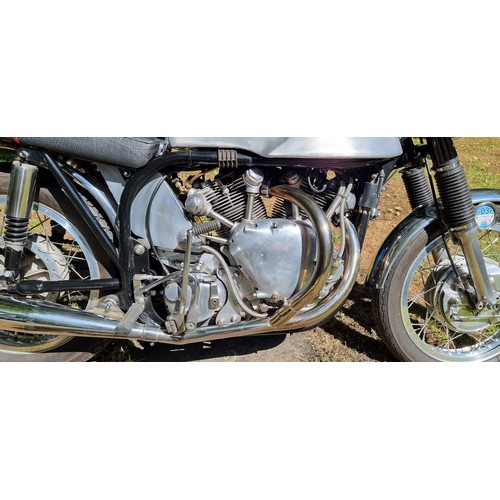 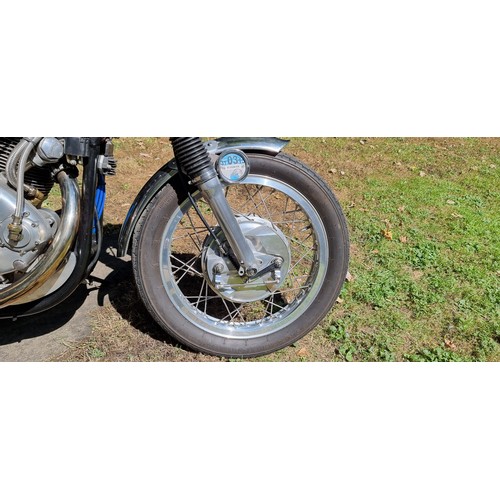 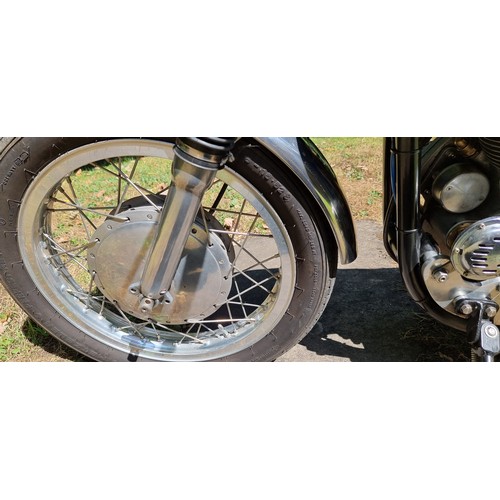 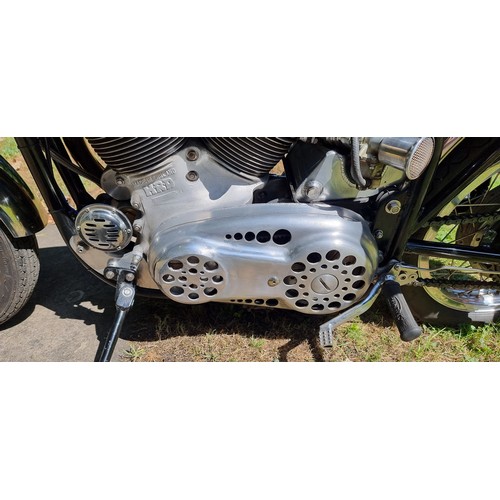 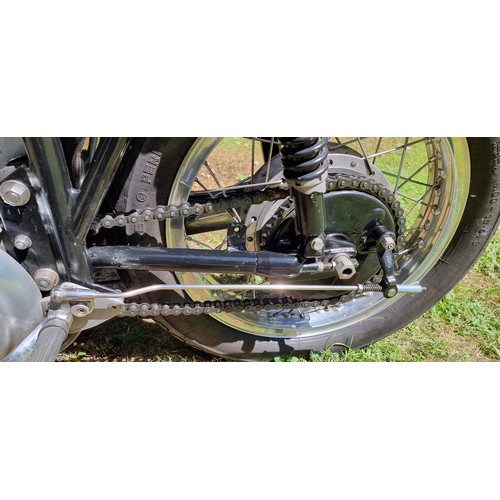 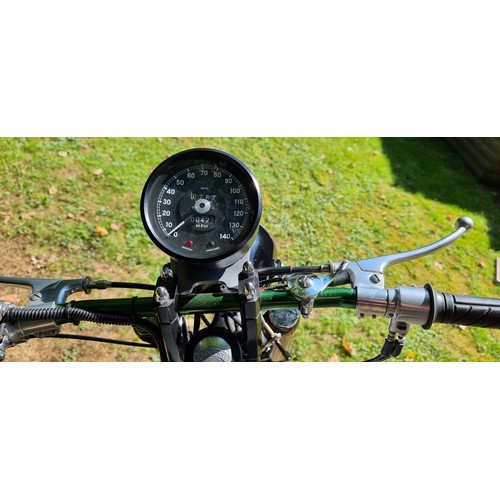 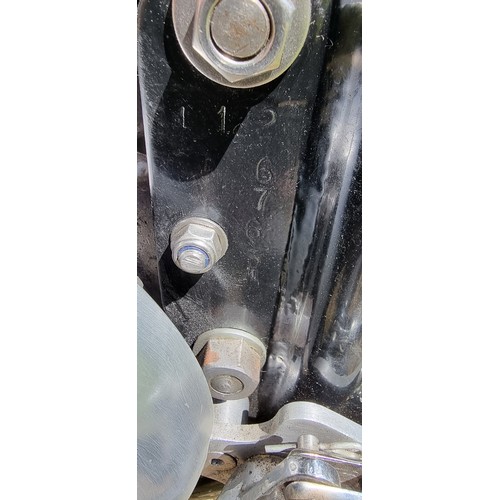 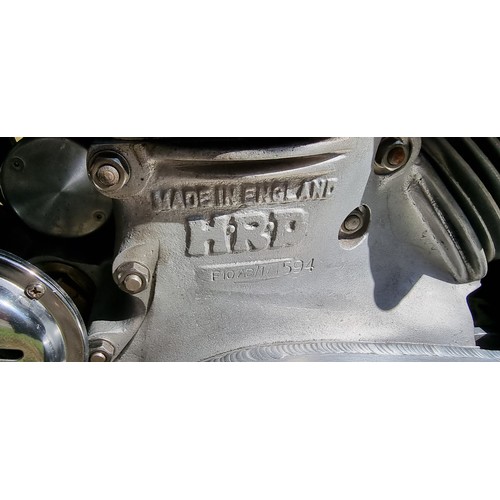 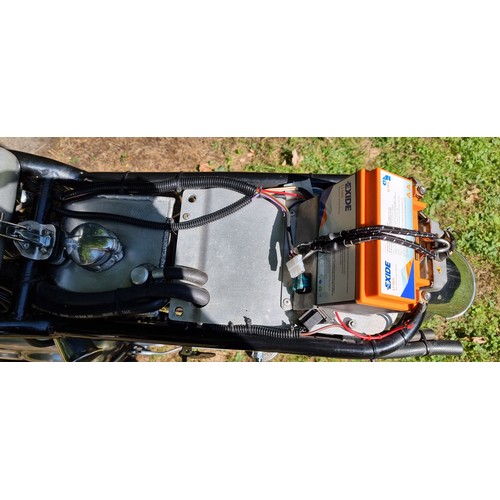 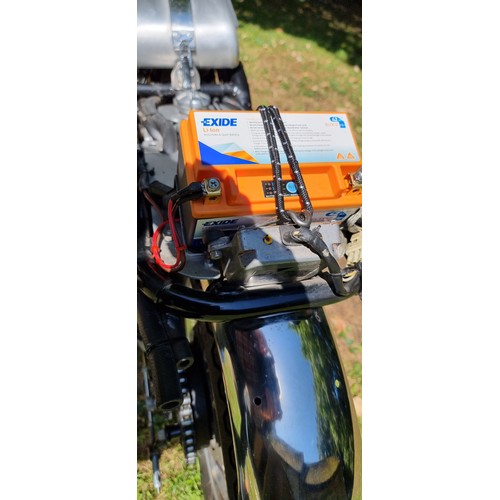 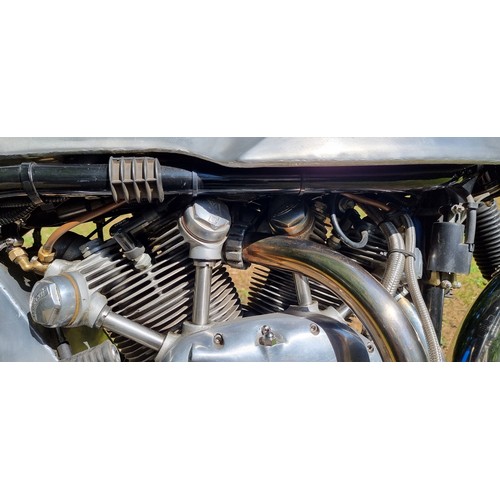 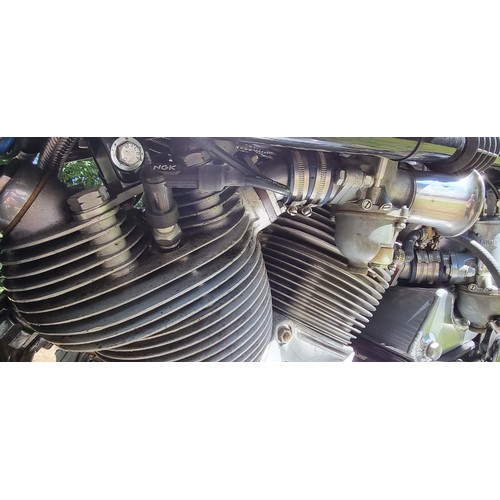 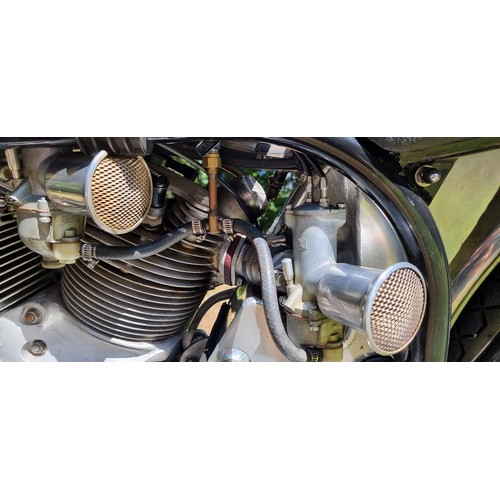 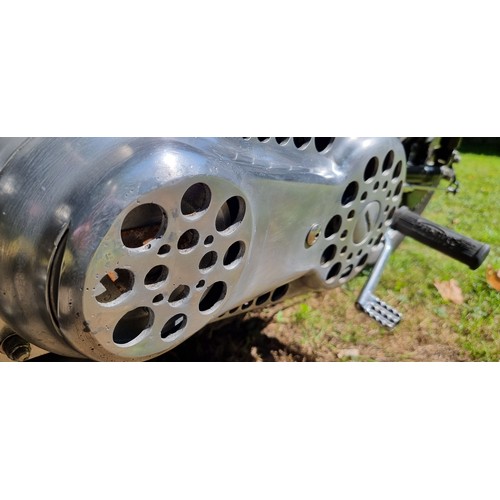 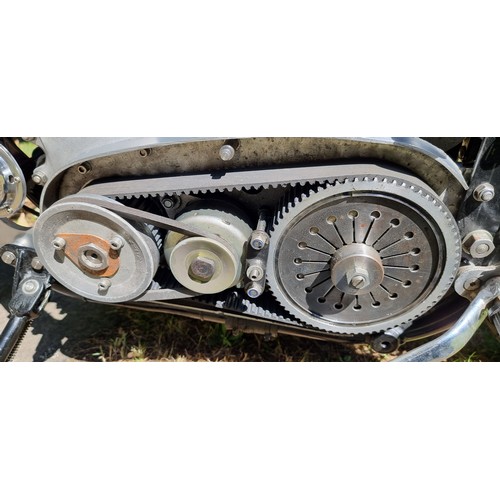 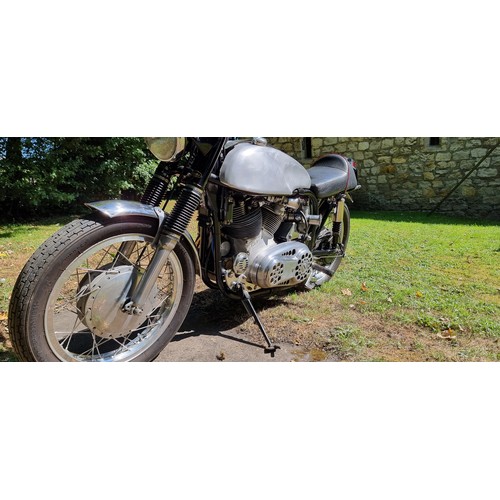 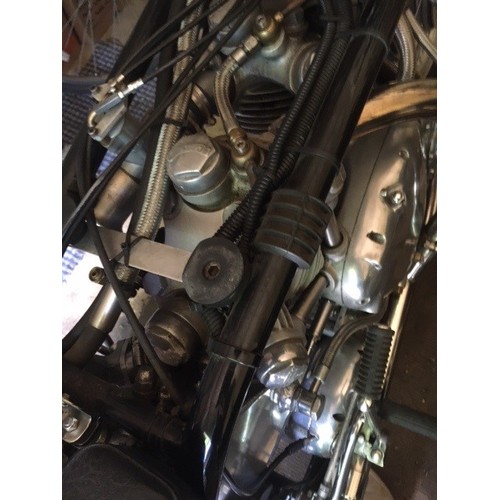 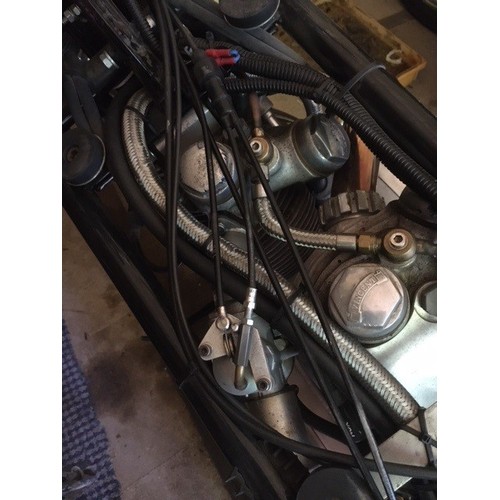 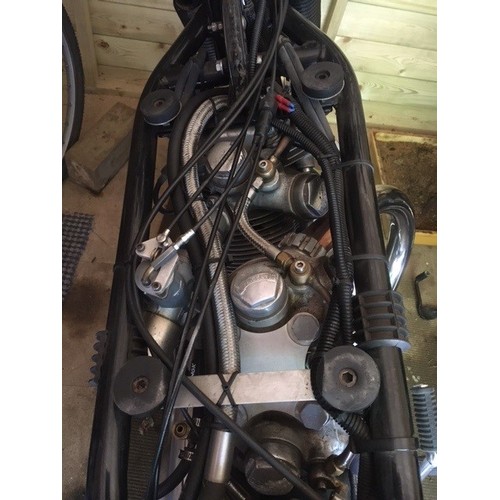 1956/2008 Norvin, 998cc. Registration number 830 XUN (non transferrable). Frame number L122 67634. Engine number F10AB/1/1594. Crankcases both 0 63.
A Norvin is a rare machine, built by engineers in their own garages combining the best 1950's engine (the Vincent V-twin) and the best handling frame of the time (the Norton Featherbed). One of the reasons for the rarity is the expense of the Vincent in the first place, people do not like to break them but engines do occasionally appear.
Our vendor, a qualified engineer with some 40 years of experience of bike building and restoration, had always wanted to build one and for a period of time he was the Norvin Section Organiser of the Vincent Club. This gave him access to the build records and experience of many other owners, what worked and what did not.
In 2001 he acquired this machine as a project; a 1956 Norton Dominator 88 frame with a 1949 matching crankcases ex race Rapide engine. He set about the project with the frame being adapted for the engine, then it was powder coated, the swinging arm had new bearing as did the headstock. The Roadholder forks were stripped and rebuilt and adjustable Koni rear suspension fitted. Akront alloy rims, stainless spokes and an 8" Triumph twin leading shoe front brake went onto the forks.
The engine was a modified ex race example, with two twin plug front heads fitted and a reduced flywheel, it was in need of a rebuild so it was sent to Bob Dunn. It was rebuilt to standard 998cc with new liners and 8.5:1 compression pistons, the cams were reprofiled to Lightening MkII spec, 32mm Amal Concentric carbs were fitted with a Lucas electronic ignition.
Transmission is via a belt primary drive with a Norton Commando diaphram clutch to a rebuilt Norton gearbox. A Kuboto generator is fitted along with a Lucas Li-lon battery. The alloy tank is a short circuit Manx example made by Lyta and the exhaust is stainless steel Vincent modified with a short Gold Star silencer.
Completed in 2008 it passed its MOT and again in 2009, with a mileage of 178, another was done in 2012 at 280 miles, today the odometer reads 426 miles.
Sold with the V5C as a 1956 Norton, a Norton dating certificate for the frame as February 1956 Model 88, copious build records and diagrams, receipts from Bob Dunn for the engine build in 2006 at £1910, receipts for the engine parts from Maughan & Sons, receipts for other cycle parts, photographs of the engine build and other related material. Due to the lack of use Spicers would recommend light recommissioning before road use. 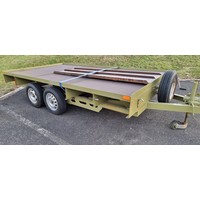 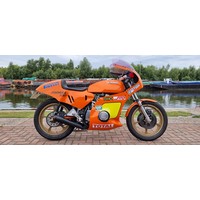