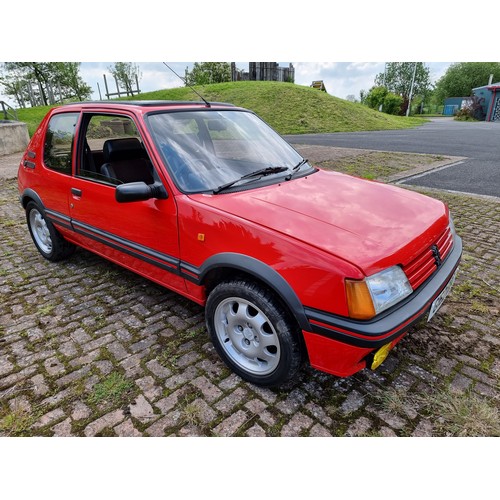 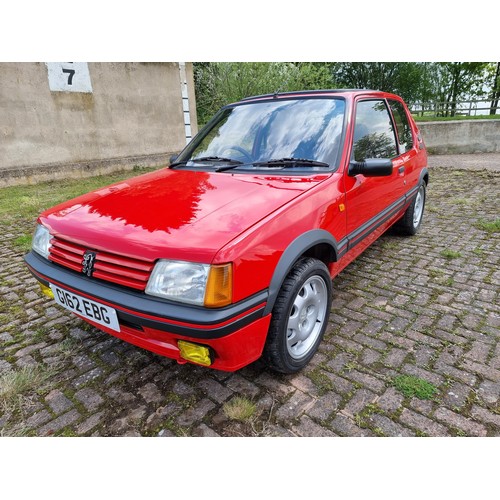 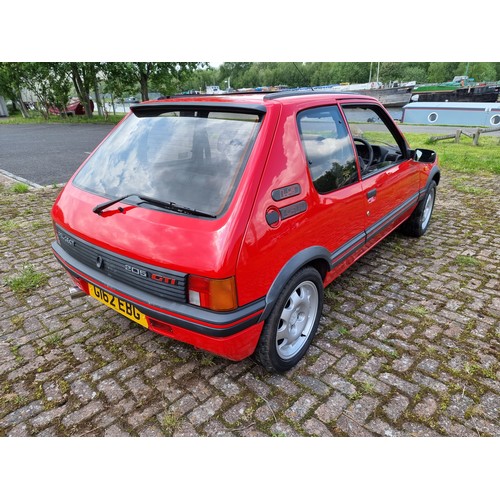 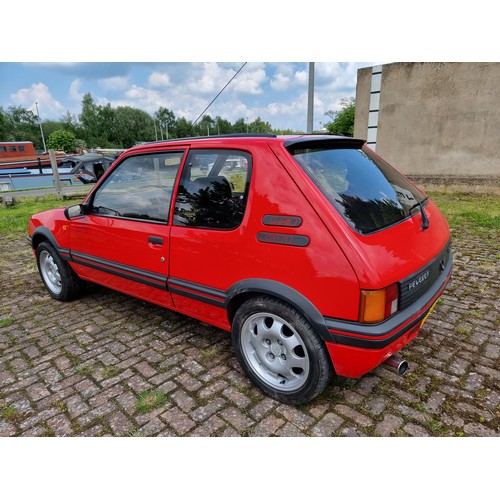 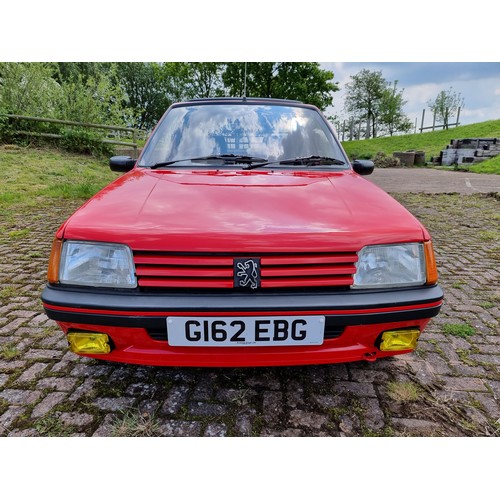 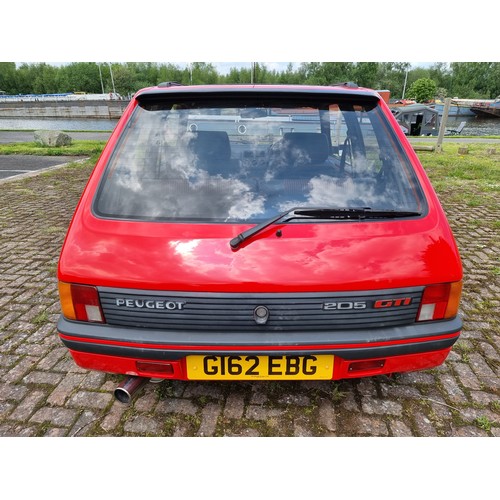 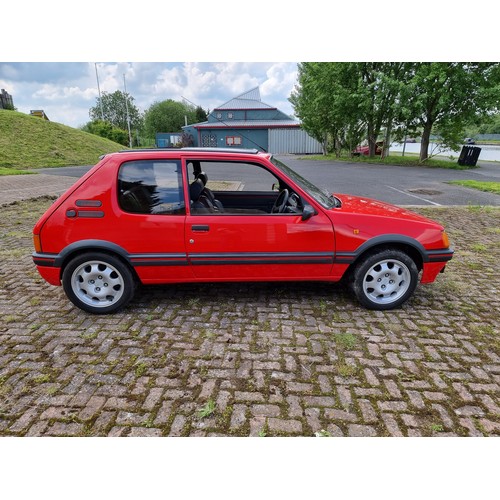 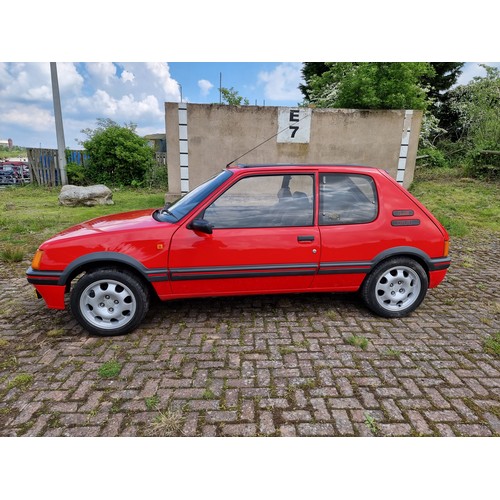 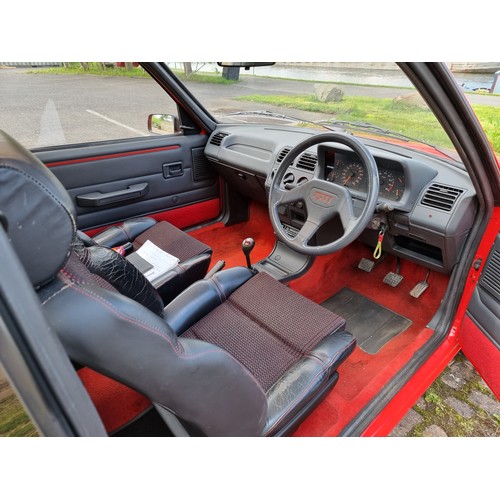 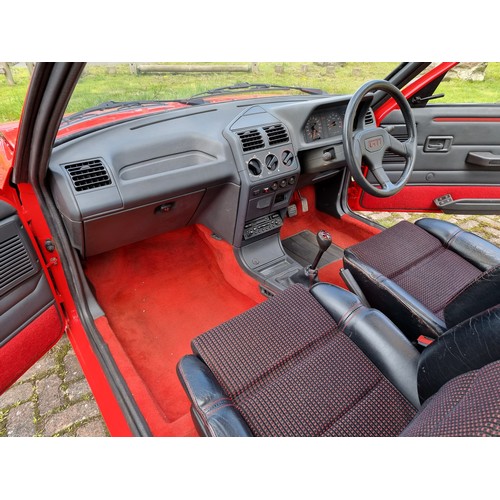 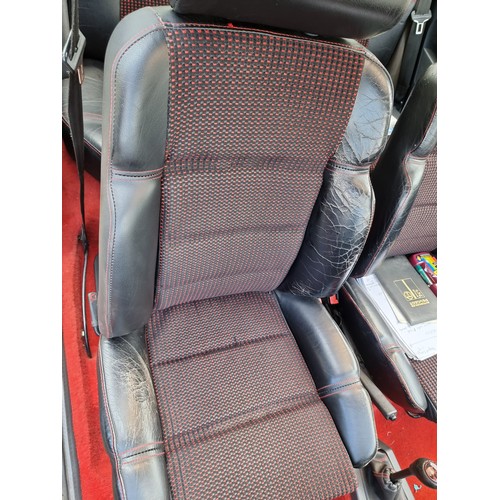 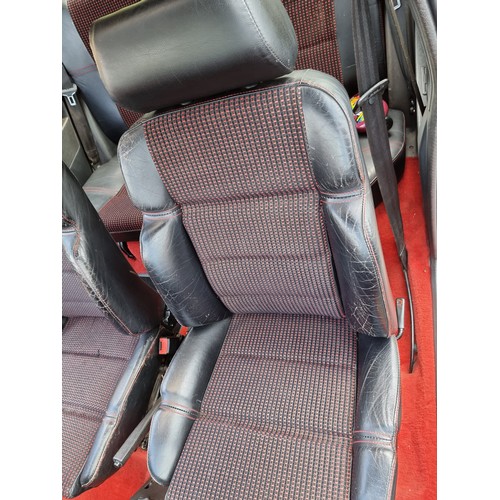 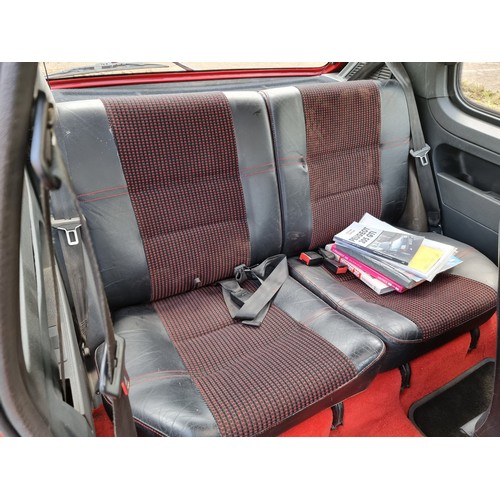 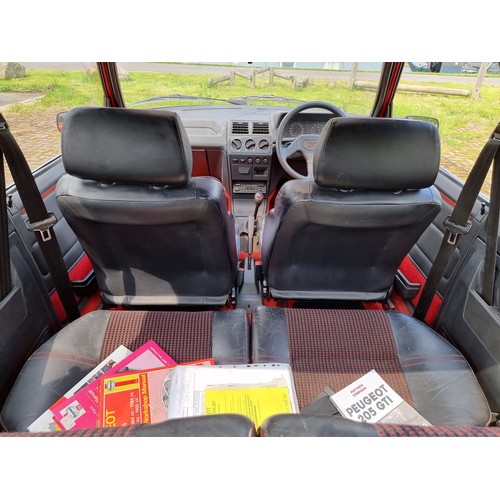 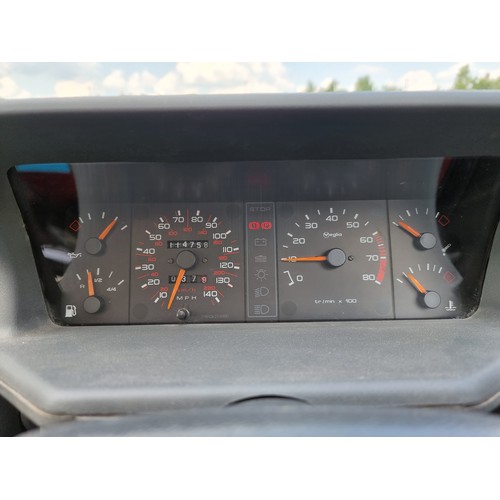 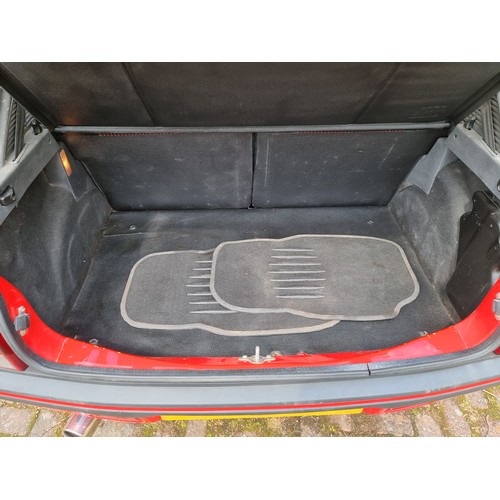 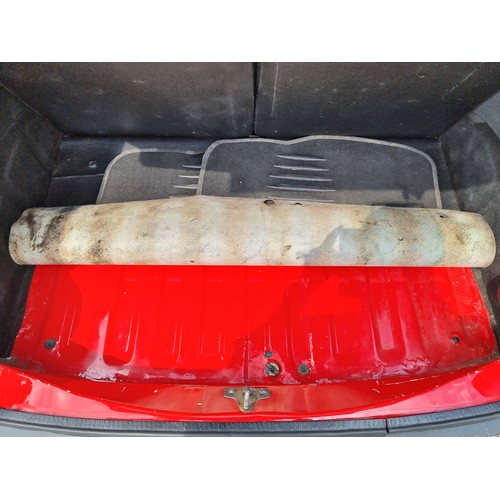 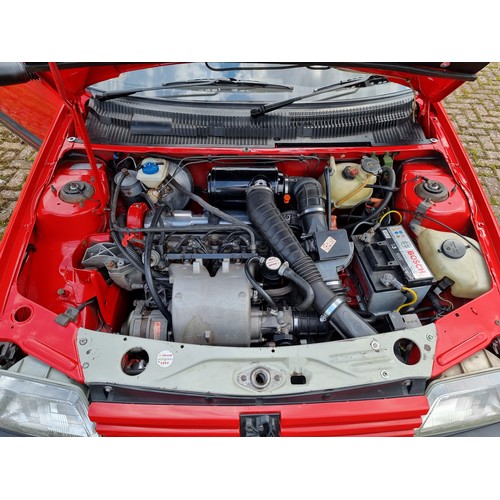 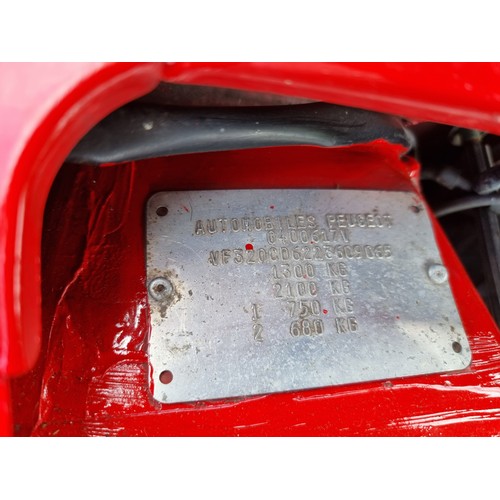 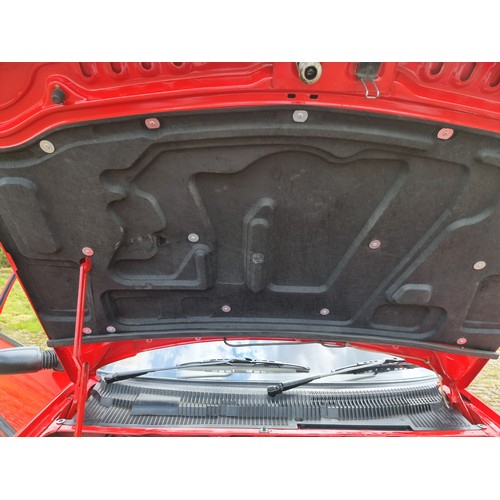 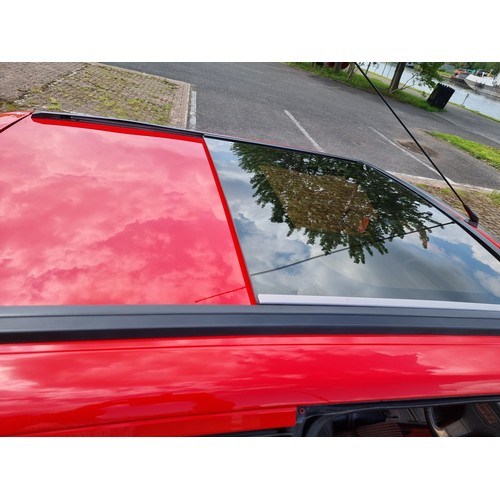 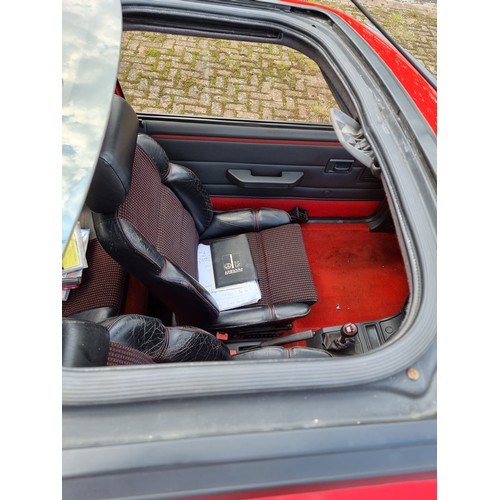 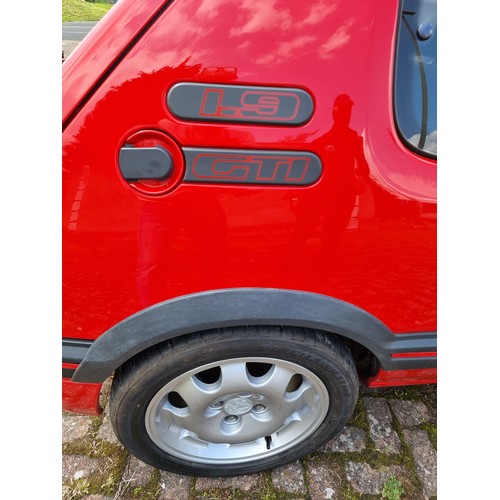 1990 Peugeot 205 1.9 GTI, 1905cc. Registration number G162 EBG. Chassis number VF320CD6223609065. Engine number 1CW3U008210.
Introduced in December 1986, the Peugeot 205 1.9 GTi has long enjoyed a reputation as one of the best 'hot hatches' ever made. Based around a lightweight three-door monocoque bodyshell, the newcomer was equipped with all-round independent suspension (McPherson strut front / trailing arm rear), four-wheel disc brakes and rack and pinion steering. Credited with developing some 130bhp and 119lbft of torque, its predominantly alloy SOHC 1905cc four-cylinder engine was allied to five-speed manual transmission. Despite impressive performance figures (0-60mph in 7.6 seconds and 124mph), it was the model's handling that won over the contemporary motoring press. Weighing in at just 880kg, the 205 1.9 GTi possessed a nimbleness and delicacy of feel sadly lacking from its modern equivalents. Though, the absence of any and all electronic driver aids can be a little disconcerting for the unwary. Boasting half leather seats, electric windows, Speedline alloys and central locking as standard, the Peugeot could be ordered in a variety of solid and metallic colours. An enduring performance icon, it remained in production until 1994.
EBG was first registered in May 1990, and comes with an early maintenance history which includes its first service at 5,866 miles in the November, 13,484 miles in July 1991 and 17,048 in the December, 26,681 in November 1992, 30,945 in March 1993 and 35,492 in the November. The cambelt was changed by Maidstone Peugeot in February 1997 at 52,388 miles while owned by Mrs Steele. It then moved to Harrogate with Mr Wilson, an MOT in June 2001 was at 90,001 miles. In July 2003 whilst with Rob Stephenson had the cam belt changed at 102,405 miles as part of a service. In January 2004 our vendors son bought it, and laid it up that year due to high oil consumption.
Our vendor was looking for a project so in 2005 he bought it from his son and began a comprehensive restoration with a friend of his. This included an engine rebuild with a cylinder head decoke, new valves, crankshaft polished, new rings, timing belt and barrels honed, the clutch, alternator and starter motor were replaced as was the radiator. The car has been set up on a dyno. The car was stripped of all glass and resprayed and the wheels were restored. The interior has largely remained original.
Sold with the V5C, large quantity of receipts for works, MOT’s from 1994 to 2004, a new MOT from October 2020, its last tax disc and owners handbook.
Please note that the car has a factory sunroof, operated by a vacuum that only works when the engine is running and the radio is period but not original and not connected. 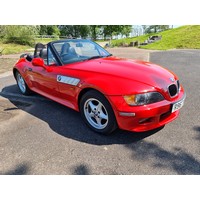 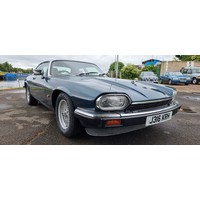