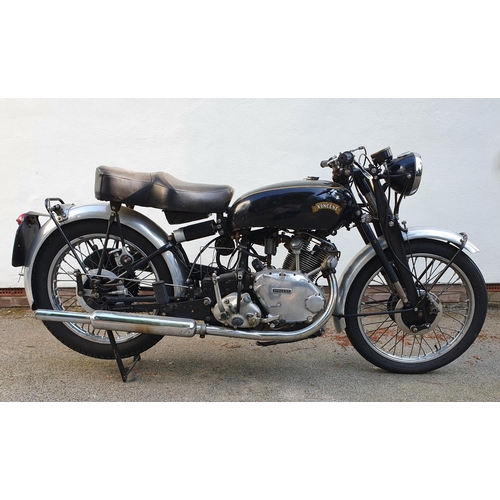 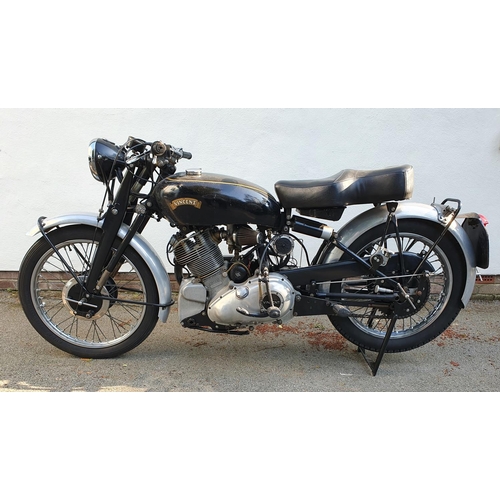 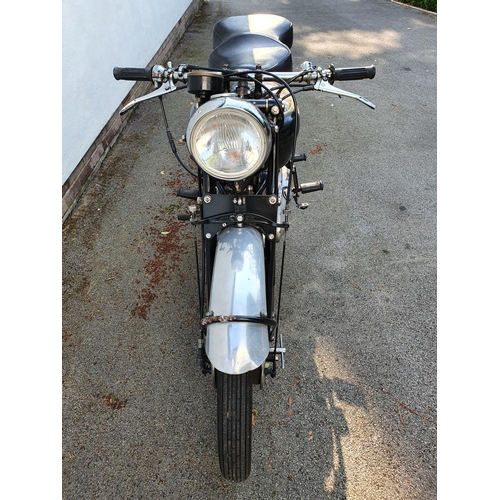 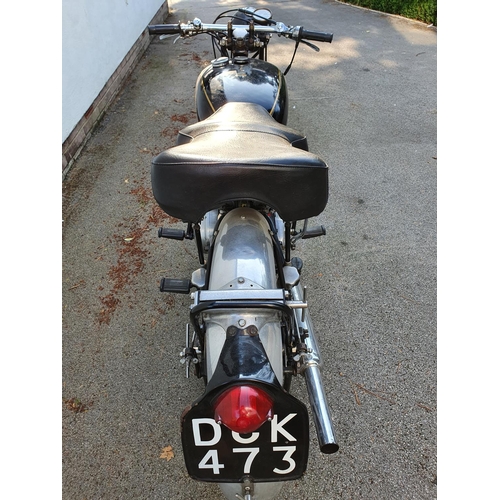 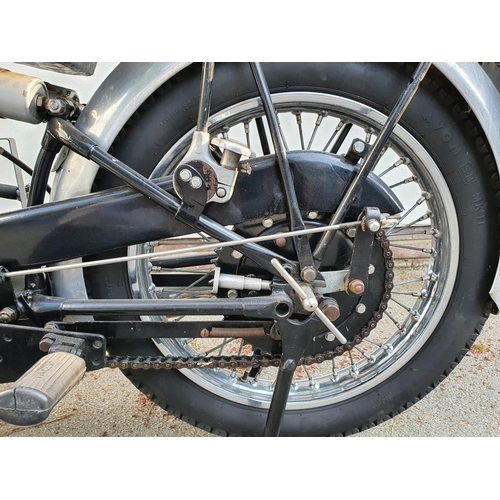 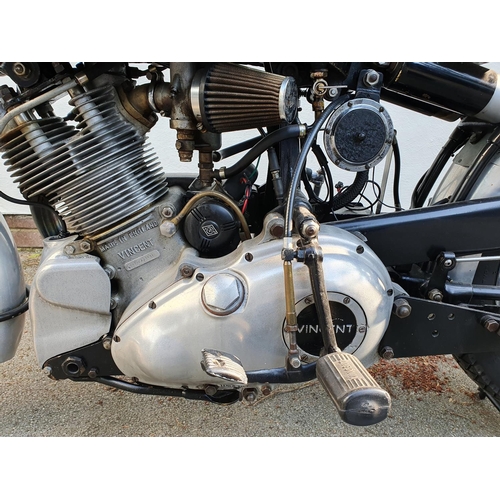 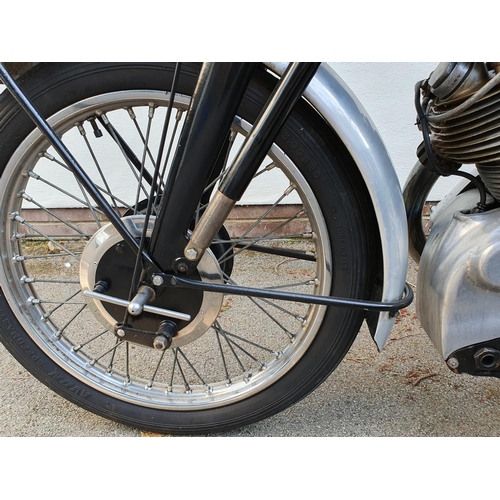 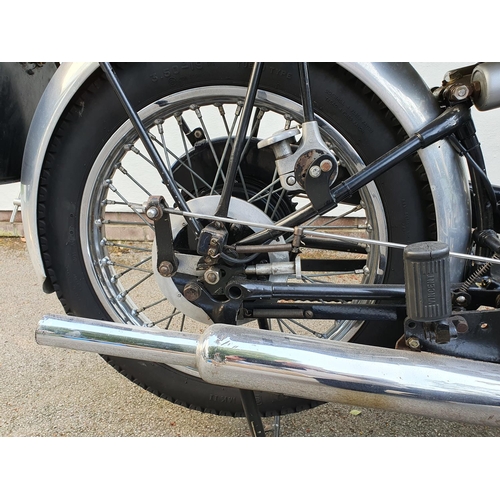 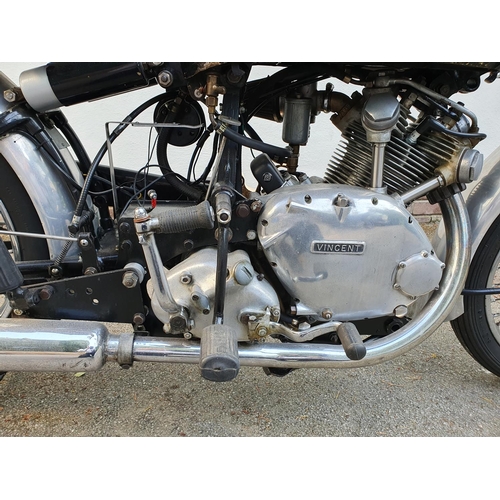 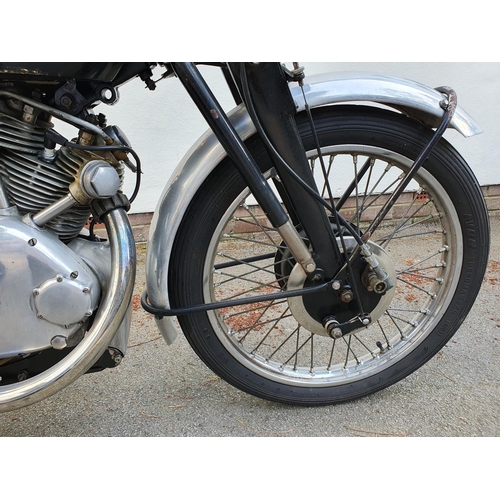 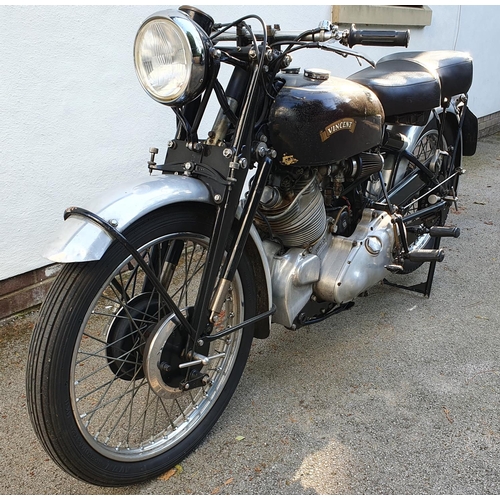 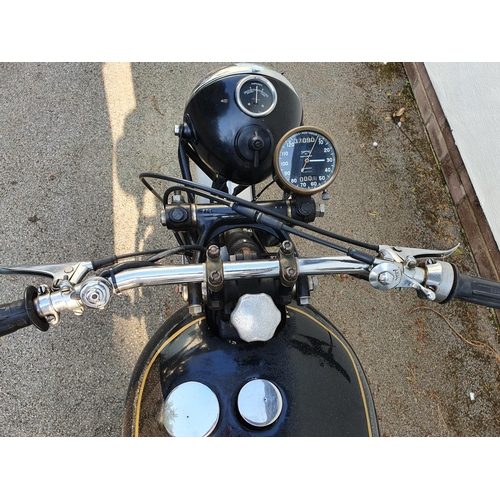 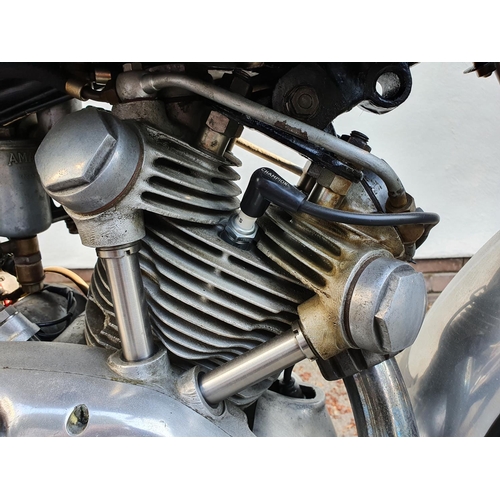 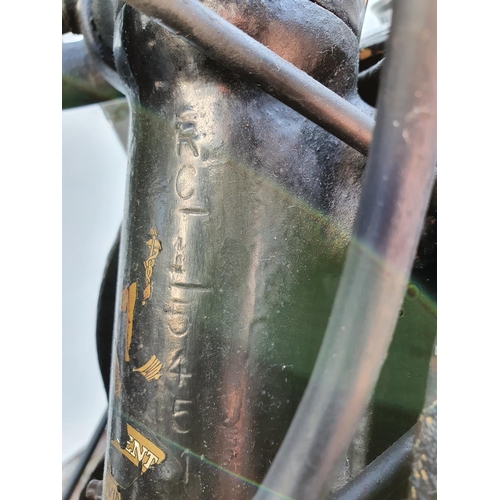 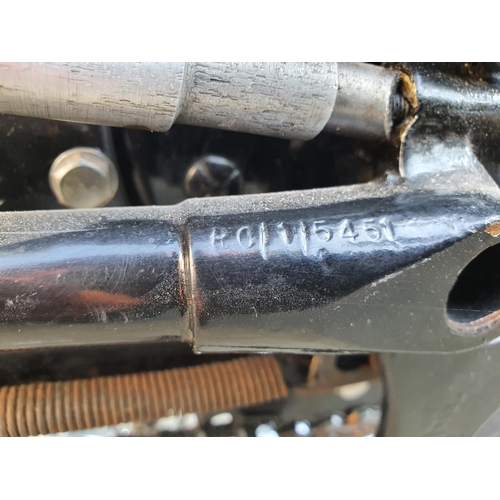 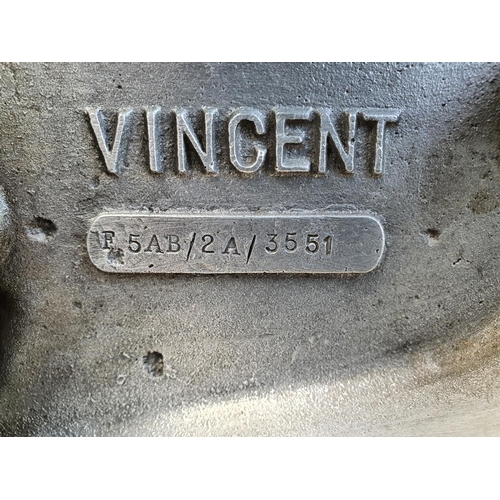 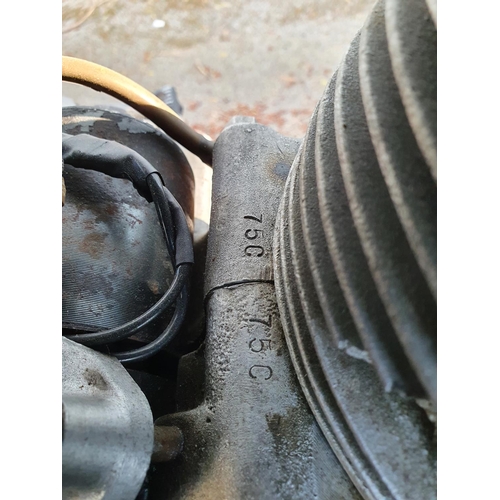 1950 Vincent Comet, Series C, 499cc. Registration number DCK 473. Frame number, headstock and swinging arm RC/1/5451. Engine number F 5AB/2A/3551. Crankcases, both 75C.
In 1928, Phil Vincent bought the name and rights to HRD, founded by popular racer Howard R Davies. HRD were an established brand and Vincent wasn't, so the most expedient thing to do was attach the latter to the former until the Vincent name had sufficient marketing gravitas to fly alone. Vincent moved production from Wolverhampton to Stevenage and set about putting his motorcycle design ideas into practice, commencing with an innovative sprung frame that would remain a feature of Vincent motorcycles until production ceased in 1955.
At the 1935 Isle of Man Senior TT, three Series A HRD Vincents were entered, and although they didn't win, they all finished, respectively, in 7th, 9th and 12th place. The short-lived Series B engine had been designed during the Second World War and post war, in 1948, two new bikes were launched: The Series B based Meteor and the Series C Comet. The Meteor was a touring roadster and was offered with a Brampton girder fork. The Comet, priced at £240, was aimed at the sporting market and was offered with a Girdraulic fork. They were replaced by the Series D in 1954 after some 3,900 were built; the company collapsed in 1955. The cantilever rear frame was a major selling point in its day and some other quality details are the standard quickly detachable wheels, a 50-watt Miller dynamo, footrests and pedals are adjustable and a side stand is fitted on both sides. In their day they were good for 90mph.
DCK, was given a Vincent Owners Club certificate of authenticity in 1992 confirming all components and there is a copy of the order form, no 22450, on file. This has been checked by today's club and they agree. This confirms the numbers; it was built on the 8th February 1950, tested on the 24th and then dispatched to Marks of Preston. Extras fitted at the factory were the footrest and pillion footrest assemblies.
The trail goes cold then but it could have been sold direct to the Isle of Man as there is a note on file asking DVLA for a UK registration as it had returned from there. In April 1992 it was owned by Michael Forsyth of Portsmouth (he applied to the Owners Club) who sold it to Paul Stracey of Mitcham in May 1997 and quickly he exchanged it with Michael Brown of Lewes in the October for a van, registered G532 PKM, a Gas Gas bike and £900, those were the days!
The following May 1997 he sold it to Richard Studholme of Coxheath, at the time the MOT confirms its mileage of 33,306 miles (if it had spent its life on the Isle of Man this would be understandable). Richard commenced a full rebuild, buying copious parts from Conway Motors of Maidstone; completed by August 1998 when it was MOT'd at 33,710 miles. Another was obtained in 2000 at 36,514 when it was sold to David Driscol of Tunbridge Wells for £4,000. Little used over the years, our vendor purchased it in October 2016 with the intention of a retirement restoration but a change of plans means that he is passing it on. He has occasionally ridden it around his local area and the mileage today stands at 37,090.
Sold with the V5C, V5, MOTs mentioned, a large receipt folder and other history and paperwork, this older restoration is ready to to use with the patina of age or undergo another refresh. Gentle recommissioning should be all that is required in addition to a new battery for the lights. 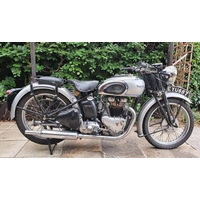 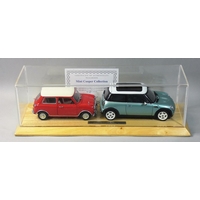