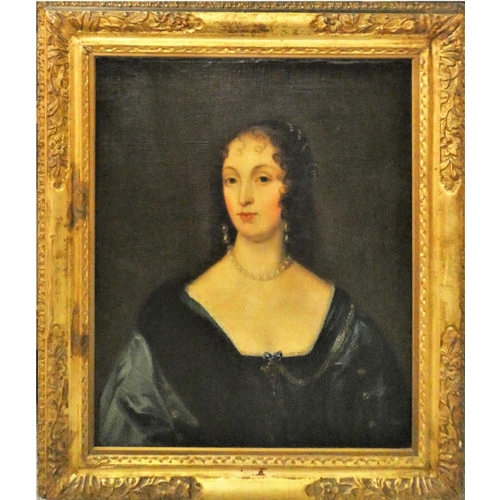 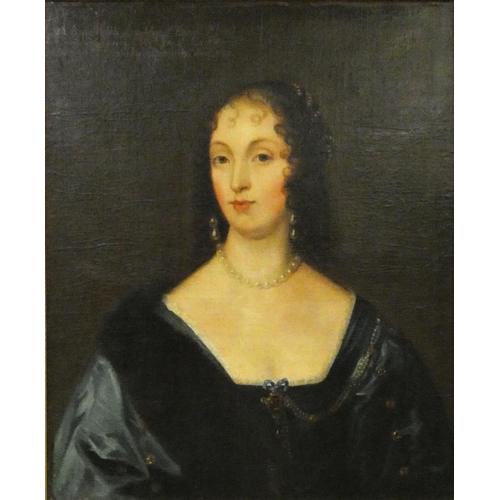 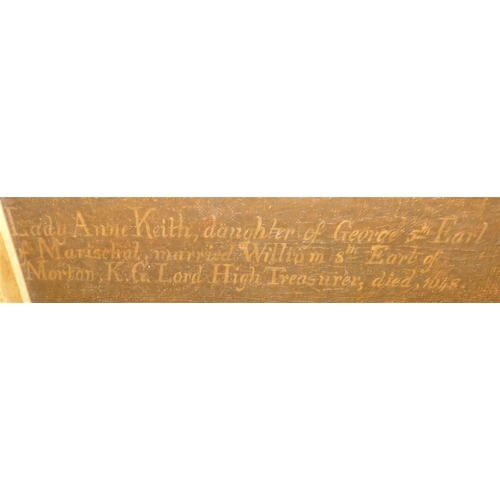 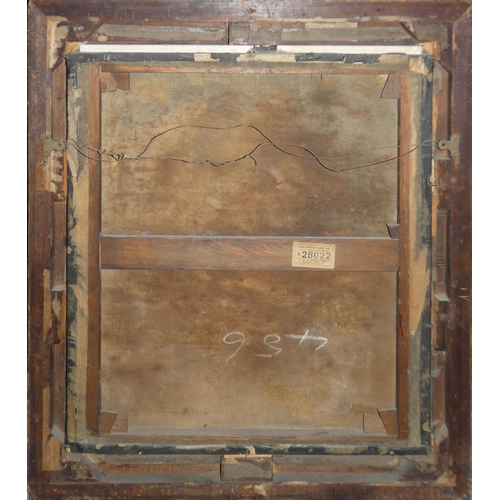 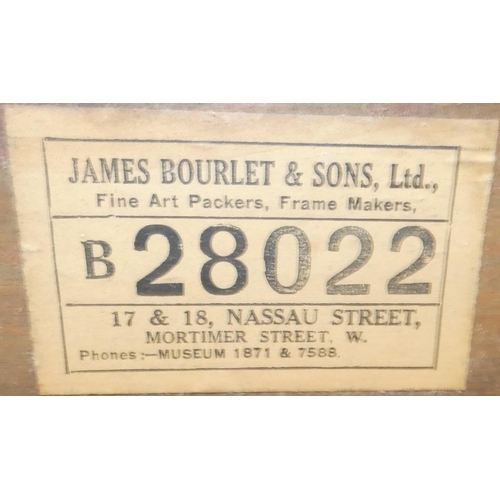 Circle of Sir Peter Lely, (1618-1680), a 17th century portrait of Lady Anne Keith, unsigned, with dedication, oil on canvas, 70 x 57 cm, gilt frame.
Inscribed top left hand corner "Lady Anne Keith, daughter of George 5th Earl of Marischal, married William 8th Earl of Morton, K.G. Lord High Treasurer, died, 1648".
Anne Keith (1586 - 1648, Kirkwell, Orkney). She married William Douglas, 7th (or 8th) Earl of Morton on 28 March 1604 when she was 18. The Keith (Morton) and Douglas (Marischal) families had very strong inter related ties throughout the generations.
William Douglas was Lord High Treasurer of Scotland (1630 - 1636) and a zealous Royalist, who, on the outbreak of the Great Rebellion in 1642, provided £100,000 for the cause. At this time there was much upheaval in England, Scotland and Ireland with the Wars of the Three Kingdoms, sometimes known as the British Civil Wars, when an intertwined series of conflicts took place in the kingdoms between 1639 and 1651. In Scotland itself, from 1644 - 45 a Scottish Civil War was fought between Scottish Royalists, supporters of Charles I under James Graham, 1st Marquis of Montrose, and the Covenanters, who had controlled Scotland since 1639 and allied with the English Parliament. The Scottish Royalists, aided by Irish troops, had a rapid series of victories in 1644 - 45, but were eventually defeated by the Covenanters.
The Covenanters then found themselves at odds with the English Parliament, so they crowned Charles II at Scone and thus stated their intention to place him on the thrones of England and Ireland as well. This led to the Third English Civil War, when Scotland was invaded and occupied by the Parliamentarian New Model Army under Oliver Cromwell.
William was granted of the Islands of Orkney and Zetland (Shetland) by Charles II in 1632, which were later annexed to the Commonwealth in 1657.
Her father, George Keith, was one of the most important and powerful men of his day in Scotland, he was sent as ambassador to Denmark in 1589 to negotiate the marriage of King James VI of Scotland to Anne of Denmark.
Little is known of Anne's personal life but she bore ten children, Lady Margaret Douglas (1610-1678), married the 1st Marquess of Argyll, Lady Anne Douglas (d. 1667), married the 2nd Earl of Kinnoull, Robert Douglas, 8th Earl of Morton (d. 1649), Lady Mary Douglas, married the 2nd Earl of Dunfermline, James Douglas, 10th Earl of Morton (d. 1686), Lady Isabel Douglas (d. 1650), married the 2nd Marquess of Montrose, Nicholas Douglas (d. 1686), Jean Douglas and Agnes Douglas.
With thanks to Lucy Gibbon, Orkney Library & Archive Service. 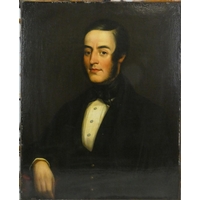 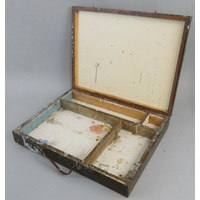