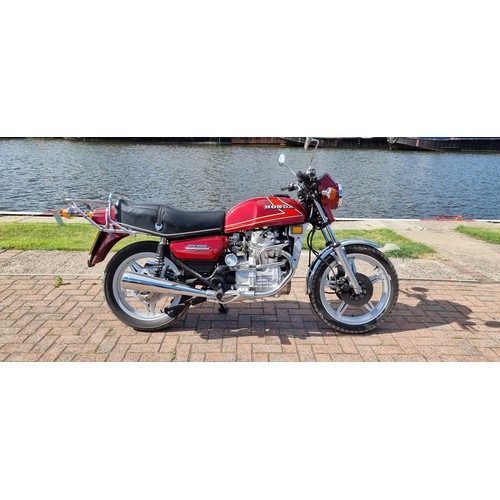 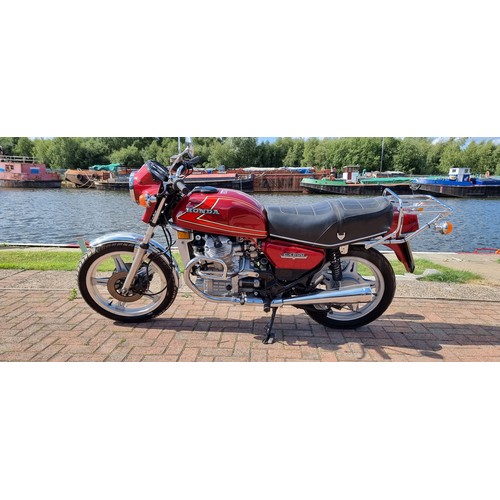 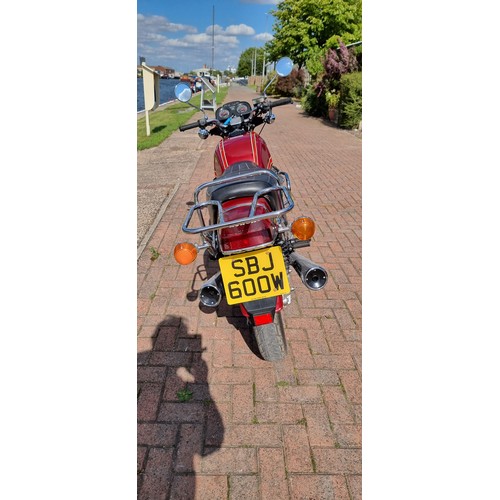 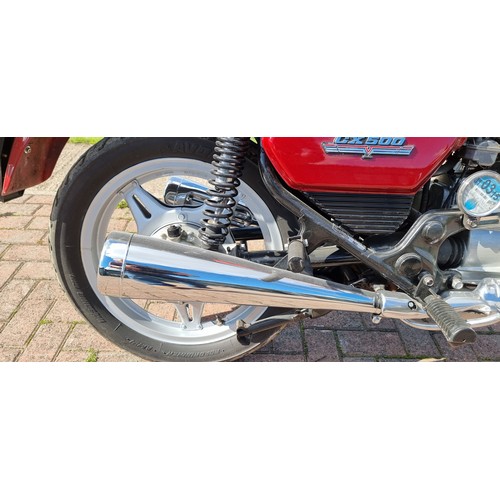 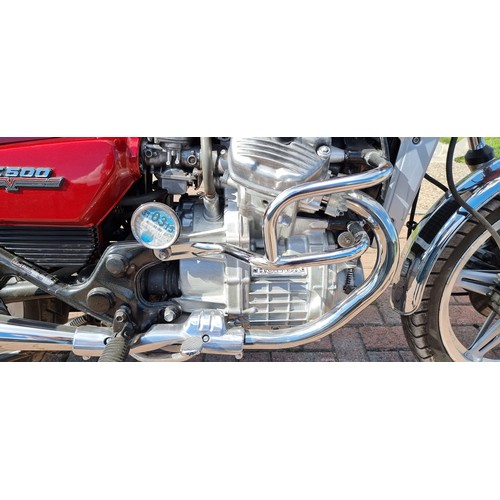 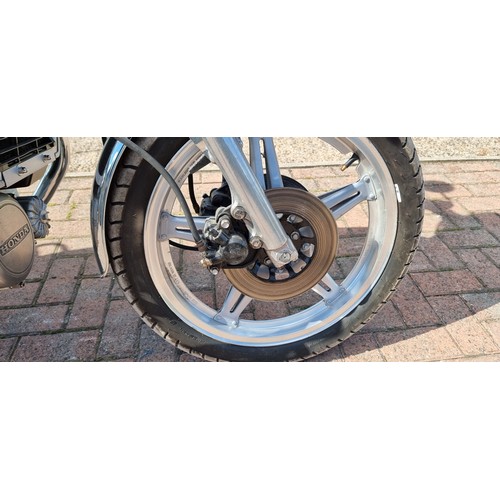 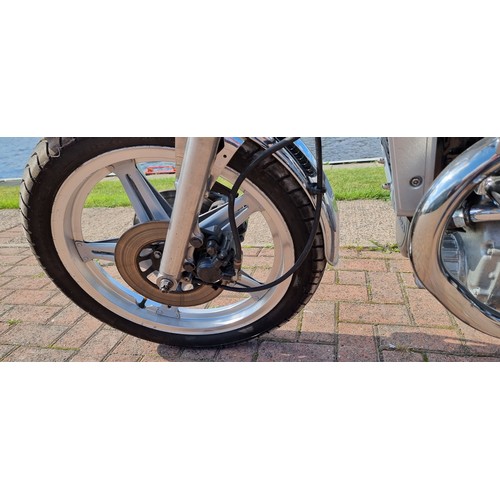 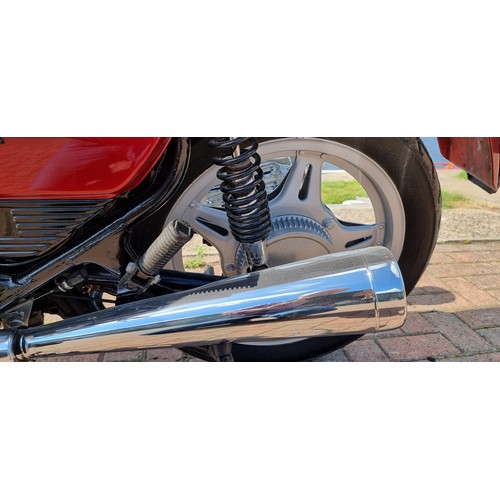 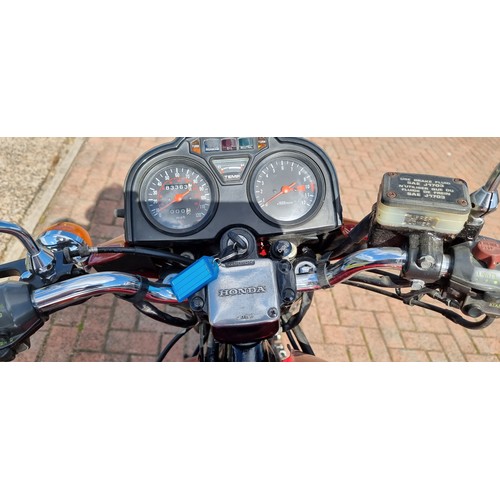 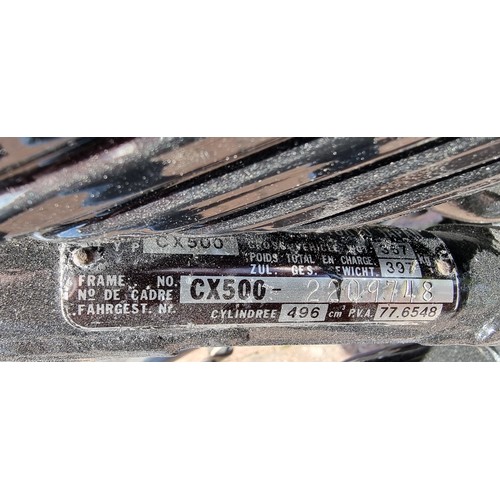 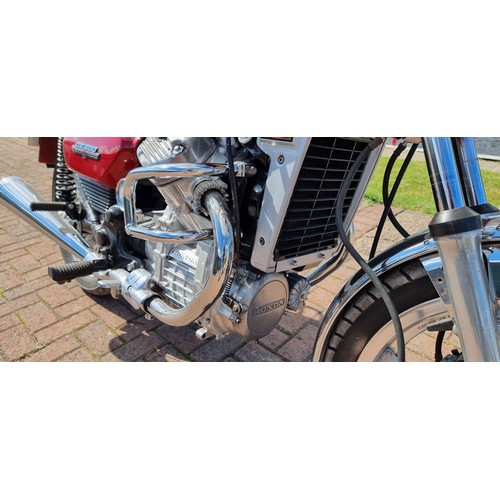 1981 Honda CX500, 498cc. Registration number SBJ 600W. Frame number CX 500 2209748. Engine number CX500E 2010329.
The Honda CX series motorcycles, including the GL500 and GL650 Silver Wing variants, were developed and released by Honda in the late 1970s, with production ending in most markets by the mid 1980s. The design included innovative features and technologies that were uncommon or unused at the time such as liquid cooling, electric-only starting, low-maintenance shaft drive, modular wheels, and dual CV-type carburetors that were tuned for reduced emissions. The electronic ignition system was separate from the rest of the electrical system, but the motorcycle could only be started via the start button.
The CX series feature a crankshaft configuration aligned longitudinally with the axis of bike, similar to the Moto Guzzi layout. Unlike a "boxer" flat-twin, the cylinders protrude at an angle above the horizontal. The included angle of the CX is 80°, and the heads are twisted 22° so that the inlet tracts do not interfere with the rider's legs. A camshaft nestles at the base of the V between the cylinders. Although Honda generally favors OHC engines, the cylinder head twist necessitated the use of stubby pushrods to operate the four overhead valves per cylinder, with a forked rocker arm acting off each pushrod. The 5-speed transmission is located below the crankshaft, with both in the same housing, an arrangement which keeps the engine short (length wise) but quite tall. The engine has a 10.0:1 compression ratio and 9,650 rpm redline. Just as with the Honda Gold Wing, the transmission rotates opposite to the engine to help counteract the engine torque's tendency to tip the bike slightly to one side when the throttle is opened or closed.
SBJ has DVLA MOT history back to 2007 at 80,972, rising each year to 2016 at 83,347 when it was acquired for our vendors Honda collection, today the mileage is 83,363.
Recently partially recommissioned for the auction, the engine has been running smoothly although Spicers would recommend further safety checks before road use.
Sold with the V5C. 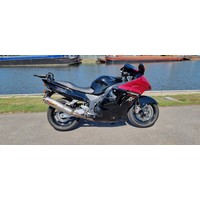